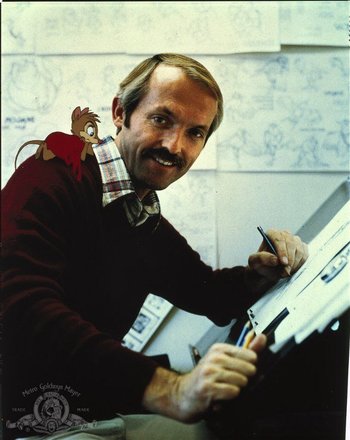 Pictured: Bluth with an admirer.
Advertisement:

In much the same way that Pixar and DreamWorks Animation are The Millennium Age of Animation's biggest names and toughest rivals, there was one animator in The Dark Age of Animation who took it upon himself when no one else would to challenge Disney as the reigning king in traditionally animated features. Remembered fondly by children of the 80s and 90s, his independent features laid the ground work for what would eventually be animation's return to its former glory in the waning years of the 20th century, an effort felt to this very day in DreamWorks, Pixar and, yes, even Disney.

Bluth's films boasted some of the most lavish character and effects animation at the time and are notably darker in theme and content than even most animated features for families made to this day, usually having a high mortality rate or grim subject matter. His were also some of the weirdest animated features, many following a disjointed fever-dream kind of internal logic. Even his more poorly-received features have their fans for their bizarre plots and really pretty animation.

Born in El Paso, Texas, Bluth's career as an animator began at his future rival's studio, working as an assistant animator on Sleeping Beauty and The Sword in the Stone. He took a break for a few years to go to Argentina on a Mormon recruitment mission, briefly working for Filmation as a layout artist before eventually getting re-hired by Disney. Unfortunately by that point, the studio was going through major financial and creative turmoil in the wake of their founder's death, and he was put to work on some of their more economical films like Robin Hood (1973) and The Many Adventures of Winnie the Pooh (most notably, the scene where Rabbit is lost in the woods). Bluth nevertheless proved himself a skilled artist, working his way up to a directing animator on The Rescuers, Pete's Dragon (1977) and The Fox and the Hound.

Deeply unhappy with the state of animation at the time and feeling that Disney was too concerned with saving money to produce a great film, Bluth wanted to remind both movie executives and the public at large what painstakingly attentive hand-drawn animation could do. He recruited colleagues Gary Goldman and John Pomoroy to start work on a pet project in his garage and for six years, the three of them met after work to teach themselves the kind of top-tier quality classical animation they felt they weren't getting at Disney, frequently consulting Disney's Nine Old Men for tips and techniques (Bluth even briefly dated Ward Kimball's daughter). Their research and development resulted in the half-hour TV special Banjo the Woodpile Cat. Reasonably successful, it was proof to the three men that they were capable of striking out on their own.

The following year, Bluth quit Disney, taking half the staff of Fox And The Hound with him to work at his new garage-based studio on an independent feature.

The new studio took its first job with the "Don't Walk Away" sequence in the Cult Classic Xanadu. Two years later was their first feature and Bluth's feature directorial debut, The Secret of NIMH. A massive, effects-heavy undertaking which forced Bluth and his two partners to mortgage their houses just to get more funding, it was a big hit with critics and fantasy fans alike, but only barely broke even (not helped by the fact that it was going up against the biggest film of the decade thus far). They produced the animation for two laserdisc-driven videogames, the cult hits Dragon's Lair and Space Ace, in order to recoup their losses.

NIMH managed to catch the eye of ET director and notable animation fan Steven Spielberg who was looking to turn the script for a proposed TV special into an animated feature. Under Spielberg's supervision, the studio created An American Tail, which was briefly the highest grossing animated feature at the time. They followed it up two years later with the prehistoric epic The Land Before Time, which became an even bigger hit. Both films were also hugely successful with critics and audiences and are still beloved to this day. By this point, Bluth's tiny garage business had expanded to a fully-operational studio in Dublin, Ireland. Feeling successful enough to once again work on his own (and getting annoyed that Spielberg was always getting the last word in creativity on their projects), he cut ties with Spielberg and resumed fully-independent production on his next film.

Back at Disney, the old guard sat up and took notice that Bluth was beating them at their own game. The financial success of American Tail raised concern (though the absolute nadir was their own lavish fantasy epic The Black Cauldron under-performing against The Care Bears Movie of all things), convincing the studio's new ultra-competitive head Jeffery Katzenberg to whip the animation unit of Disney back into shape to take down the competition. Spielberg, meanwhile, continued to produce animation: he was a major driving force between the groundbreaking live-action/animation hybrid feature Who Framed Roger Rabbit and introduced the kind of fluid, appealing animation Bluth had introduced him to in their partnership to TV audiences with Family Dog and, later, Tiny Toon Adventures.

In short, Don Bluth near single-handedly kickstarted the renaissance of animation in the west. Sadly, it was not a victory he could share in.

1989 saw the release of Bluth's 4th feature, All Dogs Go to Heaven. It was released on the same day as Disney's mega-blockbuster musical smash The Little Mermaid, which blew Bluth's tiny little indie flick out of the water. With Disney heeding his word (and admittedly still salty about the mass exodus he led in 1980) and reclaiming their title as top dog in feature animation, Bluth's films from that point on became lost in the overcrowded "all the animation that isn't by Disney" market, and were burdened by demands from what few investors he had left to be less dark and more marketable.

What was left of his studio after Mermaid was leveled two years later when his next film, Rock-A-Doodle, went up against Disney's Beauty and the Beast. There was no competition any more: the Bluth film was such a massive Box Office Bomb that he was forced to close his studio and sell the right to his previous film in order to form a new studio a couple years later. But the message was made clear at that point that animated features in the 1990s belonged to Disney, and Bluth's next three films were meddled with, rushed and underfunded, each failing harder than the last. After A Troll in Central Park became the lowest grossing animated feature of all time, John Pomoroy left his partnership with Bluth and Goldman to return to Disney.

Things looked up for Bluth in 1995 when 20th Century Fox offered him the director's chair for the first film of their new animation arm in Phoenix, Arizona. Desperate, Bluth abandoned his floundering indie project The Pebble and the Penguin and took the reigns of Fox's Animated Musical, Anastasia. It was Bluth's only financially successful project of the 90s and his first financial success since Land Before Time. However, by that point, the animation landscape had changed significantly for everyone.

The arrival of Pixar and the first fully computer-animated feature Toy Story signaled the dawn of a new age. During production of Fox's second animated feature, the sci-fi epic Titan A.E., more CGI animated films were released and outdid even Disney's most high-profile hand-drawn features both financially and critically. The major studios all took the hint and began dismantling their 2D animation units with Fox being one of the first as soon as Titan was released in 2000.

This was the final straw for Bluth, who was not only burned out from years of struggling to stay afloat but also wasn't willing to give up on his trusty paper and pencil in favor of the computer. One year later, he announced his retirement from filmmaking saying, "Never again will I draw a character and hand the rights over to someone else, which pretty much puts me out of the animation business."

As of 2021, Bluth resides in Scottsdale, Arizona, where he directs plays in his own theater, the Don Bluth Front Row Theater

, and gives online animation tutorials from time to time. He's released two books, The Art Of Animation Drawing and The Art of Storyboard, through an independent publisher, as well as a handful of educational DVDs. His last major animation project to date as been the Scissor Sisters music video for "Mary."

A prequel film to Dragon's Lair has been floating around in Development Hell since the mid 2000s, with Bluth and his partner Goldman trying and failing to secure funding due to Hollywood's lack of faith in hand-drawn animation. A successful Indiegogo campaign secured them the budget for a pitch reel, which was completed in 2017.

. Reviews of his movies in chronological order can be read here

, which includes animation tutorials and a forum in which you might even be able to talk to the man himself. You can also find his YouTube page here