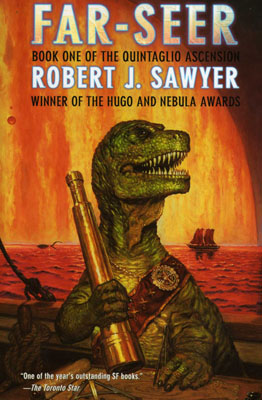 The eponymous Quintaglios are a species of human-like intelligence descended from small tyrannosaurs. Though similar to humans, the Quintaglios are true to their ancestry. They are obligate carnivores that hunt with tooth and claw, are fairly aggressive by nature, and have fierce territorial instincts that often turn out to be a major problem when several Quintaglios must work in a confined space (like, say, a ship).

The most interesting twist is this: contrary to most alien species in Sci-Fi, the Quintaglios do not possess highly advanced technology, and are instead at a level comparable to our Renaissance. As the series progresses, this becomes the key source of drama in the plot.

In the first book in the series, Far-Seer, we meet Afsan, an apprentice astrologer. Every Quintaglio goes on a "pilgrimage" to see "the Face of God". Using his telescope (what the Quintaglios call a Far-Seer, hence the title of the book), he learns that the Face of God is actually a planet and that their world, long believed to be a giant "boat" floating downriver, is actually a moon. Of more dire importance, however, is that their moon is too close to the Face of God, and will eventually break apart into a ring. Afsan's claims attract significant attention from Det-Yenalb, the Quintaglio high priest. The Royal Family descended from the prophet Larsk who discovered The Face of God, rules by divine right, and Afsan's discoveries threaten this rule. Afsan's claim that the world is coming to an end also attracts the attention of an ancient cult known as the Lubalites, who believe Afsan to be their Messiah foretold in the Prophecy of Lubal. Afsan must fight to convince his fellow Quintaglios of the dire truth, as the fate of their civilization hangs in the balance.

Far-Seer won a Homer award upon its initial release and was met with wide critical praise. It was followed by two more books: Fossil Hunter, and Foreigner; Fossil Hunter won yet another Homer award and both were similarly well-received as Far-Seer.