Western Animation / The Secret of NIMH 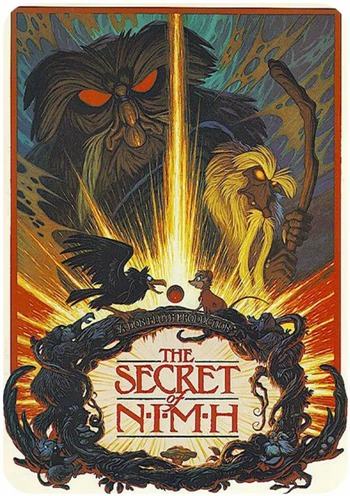 "My child, we can no longer live as rats. We know too much."
—Nicodemus

This page is about the animated film The Secret of NIMH. If you are looking for the article about the book or its literary sequels, see Mrs. Frisby and the Rats of NIMH.

The Secret of NIMH is Don Bluth's first feature-length film. It is based very loosely on Robert C. O'Brien's Newbery Medal Award-winning novel Mrs. Frisby and the Rats of NIMH.

Mrs. Brisby (voiced by Elizabeth Hartman) is a widowed mouse and mother of four living near a farm. With spring fast approaching and the frost melting from the ground, her family has to move in order to avoid the farmer's plow — but one of the children, Timothy, has come down with pneumonia and can't be moved for a few weeks. Taking the advice of an all-knowing owl, Mrs. Brisby seeks the aid of the Rats of NIMH, a group of escaped lab rats that were rendered super-intelligent via experimental drugs. After meeting with the rats' leader, Nicodemus, Mrs. Brisby finds out that her late husband Jonathan had been a good friend of the rats — and died while helping the rats carry out a plan to leave the human world behind. Nicodemus agrees to help Mrs. Brisby move her home, but some of the other rats have plans of their own...

The Secret of NIMH was Don Bluth's first feature film after leaving Disney; it was even produced a decade after Disney itself had turned down adapting the original story. Bluth used traditional tools and methods as a way of fighting back against the movement towards lower production costs (and lower quality animation). Produced by United Artists, which had just recently folded into MGM, the film was commercially a moderate box office success, costing $7 million and earning $14 million. This modest revenue was, in part, due to competition with E.T. the Extra-Terrestrial. NIMH eventually managed to seduce the director of E.T., Steven Spielberg, into teaming up with Bluth. Together, they made two rather high-grossing animated films: An American Tail and The Land Before Time.

Years after the original film, MGM released a Direct-to-Video sequel called The Secret of NIMH 2: Timmy to the Rescue. The film was, predictably, produced without Bluth's involvement.

The Secret of NIMH contains examples of the following tropes: