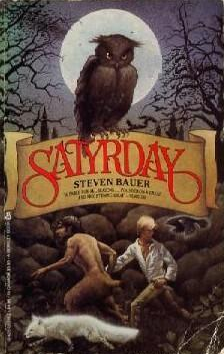 Caution: cover may depict owls smaller than they really are.

The first novel by Steven Bauer, originally published in 1980. Called a "fable" on the cover, it tells the story of the moon having been stolen from the sky by a nefarious owl and his army of ravens. A 14 year old boy and his best friend, an ages-old satyr, set up on the journey to restore light to the night, and save their world from falling out of balance. But there is more to the story than just that. What exactly are the owl's eventual plans for the world? Where did the boy come from, and are there more like him? And what exactly lies beyond their world's known borders?

The book sadly remains very rare and out-of-print to this day.

Don Bluth was planning to adapt the story into his would-be-second animated feature, but that was not meant to be.

Tropes present in the story: