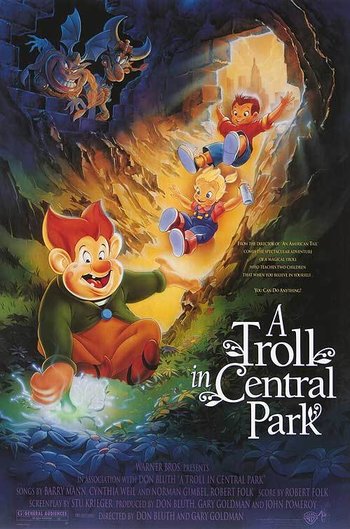 Gnorga: He is kind, he is good, he is gentle... and, he is giving a bad name to trolls everywhere!
Llort: Yes I know, love lumps. I quite agree.
Gnorga: I won't have him growing any more of those things!
Llort: Flowers?
Gnorga: [grabs him, pulls him closer] Stone him!
Llort: Why not make an example of him? I know a place, rock and steel, where nothing grows. Huh hmm, nothing! Creatures more troll-like than we are, think of it, for him it will be worse than stone, it will be slow, it will be painful! Think what they'll say about you in the newspapers! Why, it's a shoo-in for the tabloids!
Gnorga: [thinks for a moment] DONE!
—Queen Gnorga and King Llort, just before banishing Stanley to New York.
Advertisement:

Stanley is a weird troll. He is kind, gentle, loves flowers, and he has a literal Green Thumb that makes plants (talking, dancing, singing plants, to boot!) grow wherever he touches. Unfortunately, all of these, particularly his flower growing, are strictly taboo in the Troll Kingdom, so he has to keep all of his plants secretly holed up in his house.

When caught due to a rose planting gone horribly wrong, instead of punishing him by turning him into stone, Gnorga, the queen of the trolls, is persuaded by her husband Llort to banish Stanley to a place that is a nature lover's worst nightmare — New York City! While hiding out under a bridge in Central Park, he meets a boy and his little sister, Gus and Rosie, and takes them on an adventure that's 50% cutesy and 50% horror. All in all, a very strange ride.

Dissapointed in Stanley, Gus decides to fight against Gnorga and rescue his sister alongside his flowers but not without telling him how much of a coward he is

Dissapointed in Stanley, Gus decides to fight against Gnorga and rescue his sister alongside his flowers but not without telling him how much of a coward he is