Fill It with Flowers 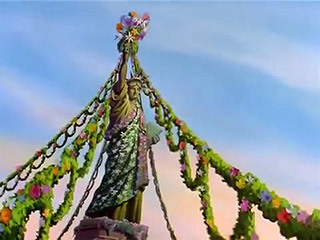 She's got a green thumb.
"Wild roses...my dream is a world filled with wild roses. When the battle is over, I want to fill the world with flowers."
— Firion, Dissidia Final Fantasy
Advertisement:

Here's a place, often a whole world, that is somewhat on the bleak side. This is no Arcadia, and may even be a Death World.

Depressed by this landscape, a (usually) female character decides to rectify the situation. She wants to plant flowers throughout the land, to transform it into an Eden of multicoloured blooms.

For whatever reason, it's very rare for the woman to do what she sets out to do. If she eventually gets her wish, it will usually be at the hand of a male counterpart, probably a love interest, perhaps as a result of her Passing the Torch upon her death. In this case, the resultant field of flowers is a tribute to her memory, like a gravestone the size of a landscape.

Male characters can also be used for this trope, but a man is more likely to want to plant trees than flowers, which are a more masculine symbol. Moreover, he will not generally need the opposite sex's help. Trees or flowers, man's dream or woman's, it is a man's work that will get it done in the end: an unfortunate Double Standard.

Either way, the greenery is a visual symbol that the world has been saved and brought to a more pleasant state. This may be used to send a message about nature.