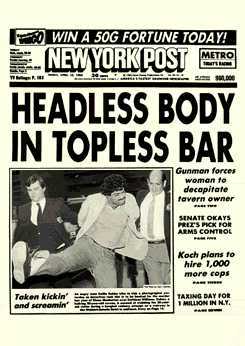 Can you top this?
Advertisement:

Newspapers love puns in their headlines, especially if they are of the tabloid variety.

Ubiquitous, really — any edition will include at least one pun that is worth a Collective Groan or Lame Pun Reaction. Bonus points if it's about sex.