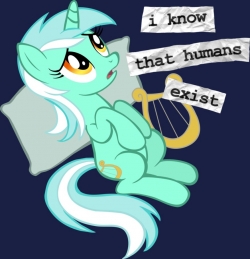 She's not crazy, no matter what anypony else says.
Advertisement:

Humans exist, right? After all, how couldn't they? The whole world seems to be built with them in mind. Is it too hard to believe they at least existed?

Lyra asks herself this question a lot, as she's been utterly devoted to finding the truth for the past few years. When Lyra finds what she believes to be indisputable evidence in the form of a lyre, she becomes determined to prove their existence, no matter how much society (and her roommate) object.

This My Little Pony: Friendship Is Magic Fanfic by JasonTheHuman has been featured

on Equestria Daily and can be found here

. There are also two official side stories: the February Write-Off entry Caretakers

(a sequel to the author's earlier fic Gurren Jesus).

This story now has its own theme song

The story has also been fully adapted into an audio-drama, the first part of which can be found here

Due to having spent all of her life in Equestria, Lyra is completely unfamiliar with the significant cultural reputation of New Jersey.

Due to having spent all of her life in Equestria, Lyra is completely unfamiliar with the significant cultural reputation of New Jersey.