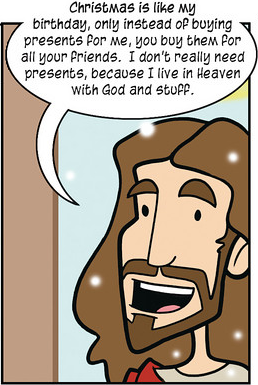 It's really not very complicated.

What is the True Meaning of Christmas? A common, yet ambiguous theme in Christmas Specials (episodes, films, stories, etc.), usually answered with An Aesop.

In fiction, the "True Meaning of Christmas" is often (though not always) "It's better to give than to receive." That is the most common Aesop, especially in kid's shows, but also sitcoms, etc. It's often lampshaded with those exact words when Mr. Exposition sums it all up at the end.

However, when you look at the most memorable and popular Christmas-themed works, each of them offers up a different "True Meaning of Christmas". For example:

Those are probably the five "staple" specials and movies of the Christmas season, in that they get shown year after year after year (on an endlessly repeating loop too). Yet none of them uses the most common "True Meaning of Christmas" Aesop.

You may have also heard the True Meaning of Christmas is being with your loved ones, worshipping Jesus and celebrating the memory of His birth, shopping, eating and drinking, worshipping Odin, worshipping Mithras, having an orgy, praying for winter to end, or using holiday traditions (most of which you've appropriated from other religions) to lure people into converting to Christianity (starting with the people from whom you've appropriated those traditions so that they lose nothing by converting, and eventually moving on to kids of other religions whose childlike materialism makes them jealous because they don't get visited by your annual gift-giving mascot). Sometimes it ends up being used as a synonym for world peace or The Power of Love; it may not even be defined, but it has the same magical effect.

Christmas in Japan is different.