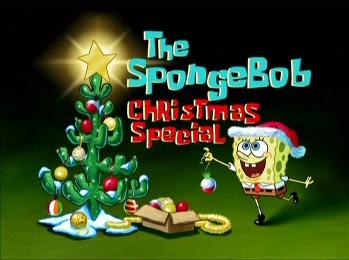 This Christmas feels like the very first Christmas to me!
Painty: Ready for Christmas, kids?
Kids: Aye aye, captain!
Advertisement:

The first Christmas Special from Nickelodeon's SpongeBob SquarePants, as well as the first double-length episode.

When Spongebob is sneaking up on Sandy to try out his latest surprise karate technique, Sandy is taken aback; not by his stealth move, but in discovering that SpongeBob doesn't know what a Christmas tree is. In fact, SpongeBob's never heard of Christmas either. After catching up on what he's missed, he realizes that Bikini Bottom has been missing out for years, and infects everyone in town with the Christmas spirit.

Everyone except Squidward that is, who doesn't believe in Santa Claus, and refuses to take part in any of SpongeBob's Christmas shenanigans. Unfortunately, Santa's a no-show by morning in Bikini Bottom, and everybody blames SpongeBob for wasting their time, and Squidward rubs it in SpongeBob's face, before receiving a special handmade gift that SpongeBob had crafted for him, thinking that Squidward would feel left out when... Santa came. Feeling like a jerk, Squidward decides to save Christmas.

Originally the only SpongeBob Christmas special, until a stop motion special was released in 2012 as a part of Season Eight entitled Its A Sponge Bob Christmas.

"Christmas Who?" contains examples of:

SpongeBob, Patrick and company sing a jolly song as they prepare for their very first Christmas in Bikini Bottom.

SpongeBob, Patrick and company sing a jolly song as they prepare for their very first Christmas in Bikini Bottom.