Western Animation / It's a SpongeBob Christmas! 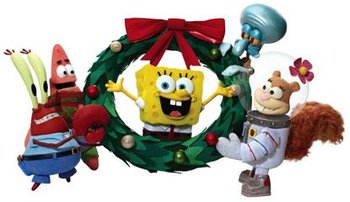 It's a SpongeBob Christmas! is the second Christmas Episode from Nickelodeon's SpongeBob SquarePants. It was released Direct to Video on October 30, 2012, and made its television premiere on CBS on November 23rd, before its Nickelodeon debut on December 6th, where, in a rare achievement for cable television, it outrated the CBS airing. Unlike its predecessor, "Christmas Who?", this one was animated in stop-motion animation in the spirit of many of the Rankin Bass holiday specials.

The special finds Bikini Bottom once again celebrating Christmas, but Sheldon J. Plankton has other plans. Because Santa Claus is always giving him coal every Christmas due to him being the biggest jerk in town, Plankton has come up with a scheme to make himself look nice and finally get his dream gift (the Krabby Patty formula, of course). His plan is to feed a special kind of fruitcake to all of Bikini Bottom's citizens; the fruitcake in question contains an element called jerktonium, which makes anyone who consumes it turn nasty. Plankton gets the innocently naive SpongeBob (whose love of Christmas makes him immune to jerktonium) to go around town giving these fruitcakes to everyone else, so soon almost everyone in Bikini Bottom has turned into detestable jerks. It's up to SpongeBob to restore the holiday spirit to his hometown.