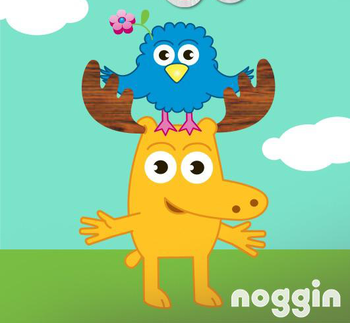 Zee on top of Moose.
Moose and Zee are a pair of animated mascots who hosted program breaks on Nickelodeon's sister channel Noggin. They made their first appearance in 2003, shortly after the channel relaunched its preschool block. Moose and Zee ushered in an age of much younger-skewing content on Noggin, as opposed to the weirder, more experimental content from its first few years.
Advertisement:

Moose A. Moose is a talkative yellow moose while Zee D. Bird is a mute blue bird. The two are close friends and are always seen together. Together, Moose and Zee teach young children various things, tell stories, and sing songs.

The characters were seen on TV from 2003 to 2012 (2013 in the UK). In 2015, the Noggin brand was revived as a mobile app, and Moose and Zee were temporarily brought back as the hosts. Some of their older shorts were also included in the app, edited to remove the wraparound segments that announced which shows came up next. Since 2019, Moose and Zee are no longer the hosts, but some of the shorts still remain. Occasionally, app users unfamiliar with the characters mistake them for a TV show of their own; it's important to note that Moose and Zee were just channel mascots and (unfortunately) never had their own show.

The main segments are:

Moose and Zee also appear as hosts on the Wii game Nickelodeon Fit.