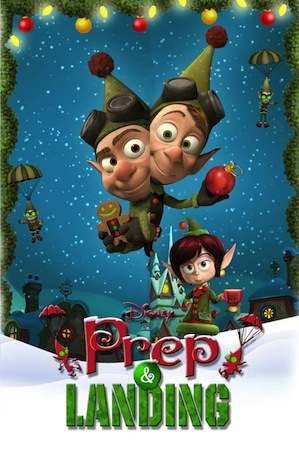 "Have you ever wondered how it all gets done? How Santa gets in and out of millions of homes all in one night? Let's just say he has a little help... Our mission statement is: Get in. Get out. Never be noticed. I'm part of Prep and Landing, an elite unit of elves getting houses ready, around the world, for the big guy's arrival."
— Wayne
Advertisement:

It is a story of two holiday elves, part of an elite unit known as Prep and Landing, which arrives at each house ahead of time and prepares for Santa's arrival.

Wayne is an old pro who's been working on Prep and Landing for over 200 years and is finally hoping to receive a promotion. After being turned down, he is teamed up with a new recruit, Lanny. The two head off to Timmy's house to prepare for Santa's arrival. But with Lanny's inexperience and Wayne's new defeatist attitude, things go wrong real quickly, and the house is not prepped in time. And with the threat of a terrible snow storm, it appears that Santa has no choice but to skip Timmy's house that year. Realizing the error of his ways, Wayne only has a limited amount of time to make things right.

It has been followed by a seven minute short for the 2010 holiday season titled "Operation: Secret Santa" featuring Betty White as Mrs. Claus (a role she had previously played in two other holiday specials) and in 2011, "Prep & Landing: Naughty vs Nice" about Wayne's enstranged brother and the lists being tampered with by a child who got a hold of elven technology. 2012 was the first year a Prep and Landing special or short was never released.

It is also the first Disney property to cross over with Marvel in the comic story "Mansion: Impossible" in which Wayne and Lanny must prepare the Avengers Mansion for Santa's arrival. This ran as a backup in The Avengers (Vol 4) #19 and two Marvel Adventures books.

Prep and Landing provides examples of:

Naughty vs Nice provides examples of: