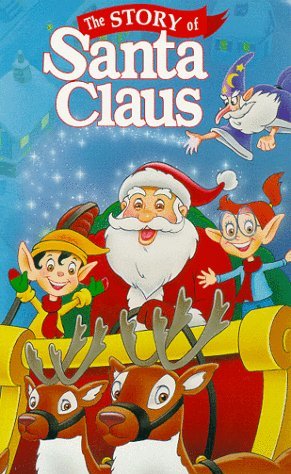 The other Christmas Special that explains the origin of Santa Claus. Produced by Film Roman and broadcasted on CBS in 1996, it continues to air annually on that network. It stars Edward Asner as Nicholas "Santa" Claus (seven years before Elf) with Jim Cummings as Santa's singing voice. Betty White as Mrs. Claus (a role which she would reprise two years later in The Noddy Shop: Anything Can Happen At Christmas and then again in Prep and Landing: Operation: Secret Santa) and Tim Curry as the elf wizard Nostros. It was directed by Toby Bluth, brother of Don.
Advertisement:

The special starts off with Nicholas and Gretchen Claus running a toy shop in old-timey Europe. Selfless to a fault, Nicholas "gives away more toys than he sells." It turns out this is not a solid business strategy, and the debt-ridden Clauses are evicted by their greedy landlord. Left with little more than the clothes on their backs, the Clauses decide to give their remaining toys to the children at the Angel's Island Orphanage, which was where Nicholas grew up, but their ship is overtaken by a storm. They are miraculously transported to the North Pole, where they encounter a magical community of elves. The ones with names are Nostros, his clumsy son Clement, and the Insufferable Genius elf girl Aurora. After Nicholas saves Clement's life, he's given one wish. Nicholas wishes that he could give a toy to every child in the world. Nostros is aghast. Even with the elves' magic, this wish is "impossible!" But Nicholas gradually wins the elves over to his dream.

The special contains the following tropes:

Clement and Aurora try to find the right animal to pull Santa's sleigh.

Clement and Aurora try to find the right animal to pull Santa's sleigh.