How Can Santa Deliver All Those Toys? 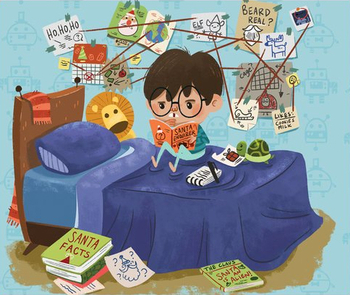 Meatwad: I just figured Santa was off to an early start this year. Because, you know, statistics show that there are more children in the world today. That's China's fault.
Frylock: Where did you hear that?
Meatwad: Regis.
— Aqua Teen Hunger Force
Advertisement:

A question often brought up to disprove the existence of Santa Claus: How the heck could he deliver all those toys to so many children in one night? There are so many factors involved, it just wouldn't be possible by natural means.

But of course, when Santa has flying reindeer and elves working with him, he might not be limited to natural means. One answer is to make him a Time Master, so he can take as long as he needs to. Simpler yet, A Wizard Did It.

Interestingly, most fiction questions only how the toys are delivered, not how so many adults (even in the worlds of fiction) can fail to notice the toys and thus not believe in him.

This trope comes into play whenever someone asks the question, but often someone will have an answer, or when Santa is shown to be real, we are given the actual answer.

Conversely, someone may invoke this trope as an excuse to get out of a Ludicrous Gift Request: You can't expect Santa to bring you a hippopotamus or a rocket launcher since they wouldn't fit in his sleigh!

Not to be confused with Where Does He Get All Those Wonderful Toys?.

Kermit, Grover, and some children speculate on how Santa gets into houses.

Kermit, Grover, and some children speculate on how Santa gets into houses.