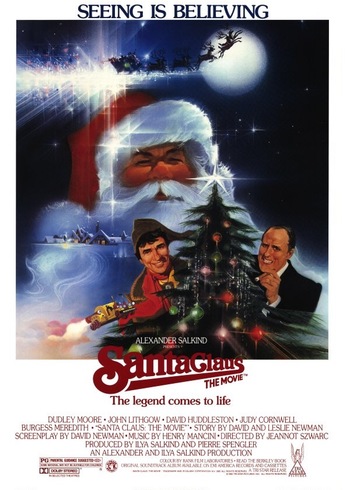 A 1985 film from the producers of the first three Superman movies (and the director of Supergirl), starring Dudley Moore as one of Santa's elves and John Lithgow as a Corrupt Corporate Executive who seeks to commercialize Santa's Christmas magic. David Huddleston plays Santa, but doesn't get above-the-title billing despite playing the title character.

The film's first act presents an origin story for Santa and proceeds to follow the growth of his legend over the centuries. The remainder of the film takes place in the then-Present Day. While Santa befriends both a Street Urchin and a Lonely Rich Kid in New York City, the aforementioned elf Patch — after screwing up one Christmas with an ill-fated attempt to bring an automated production system to the workshop — heads to the Big Apple himself and falls in with the sinister toy mogul B.Z., who agrees to distribute Patch's amazing new invention, one that can rival anything Santa's produced. From there the villain intends to build on its success to conquer Christmas altogether...no matter who gets hurt in the process, because there's a dangerous flaw in Patch's creations that only B.Z. and an underling are aware of. Can Santa and his friends save Christmas and the spirit of giving?

Not to be confused with the Mexican film Santa Claus (1959). The second half of this film has some similarities to the later, more successful Elf.

Scenes from the 2.35:1 theatrical version the film compared to a 4:3 pan and scan version. Note the two-shot where one character is often cut out.

The 4:3 clips are sourced from a contemporary making-of documentary.

Example of:
Pan and Scan

Scenes from the 2.35:1 theatrical version the film compared to a 4:3 pan and scan version. Note the two-shot where one character is often cut out.

The 4:3 clips are sourced from a contemporary making-of documentary.