Tabletop Game / Sentinels of the Multiverse 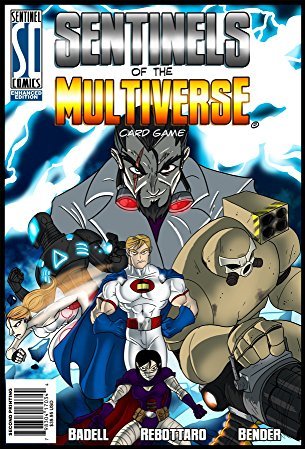 Sentinels of the Multiverse, according to its rulebook, is the World's Greatest Cooperative, Comic-Book Based, Fixed-Deck Card Game. Created in 2011 by Christopher Badell, Paul Bender, and Adam Rebottaro, under the moniker of Greater Than Games, Sentinels pits three to five heroes—each represented by a unique deck of cards—against one of several varied and interesting villains, each represented by their own unique deck. One of several environments (also represented by a deck of cards) plays cards throughout the fight, hindering or helping both sides of the battle and creating a dynamic flow to the game.

The variety of the villains and environments are not simply alternate skins; each villain and environment deck has its own unique mechanics, and the villains' character and rules cards are double-sided, representing multiple phases of the fight. Each of them has a unique "flipping" mechanic (a trigger that makes them flip to the opposite side of their card) and drastically different effects based off of which side they are on. They also have an optional, advanced rule on each side that further empowers them and complicates victory for the heroes.

The game has a huge roster. Visit the (currently in progress) Character sheet for more information on the cast.

A digital version of the base card game

was released in December 2014, with each expansion being released as DLC afterwards.

A tactical combat game Sentinel Tactics: The Flame of Freedom was funded through Kickstarter and released in 2014. Sentinel Comics: The Roleplaying Game was also funded through Kickstarter for 2020. In addition, a video game based on the franchise (not to be confused with the digital adaption of the card game) called Sentinels of Freedom was funded on Kickstarter for PC, Switch, PS4, and XBox. As of this writing, only the PC and Switch versions have come out.

A revised version of sentinels titled 'definitive edition' with new art, re-balanced mechanics, and new cards is currently in development with Kickstarter pre-orders becoming available on March 30, 2021 and the commercial release being slated for August 5th, 2021.