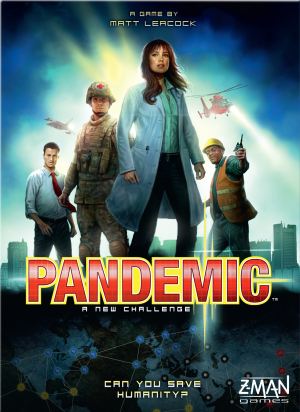 Pandemic is a cooperative Board Game first released in 2008, where the players take on the roles of a small band of researchers and medics trying to stem the outbreaks of four deadly diseases across the globe. The second edition of the game came out in 2013, whose rules are available here.

In addition to the base game and expansions, there are many spin-offs covering a range of different themes and gameplay styles:

Like Ticket to Ride, a 10th Anniversary Edition for Pandemic was released with high quality components for $100 in early 2019.

Not to be confused with the video game of the same name, where the player goal is to DESTROY the world with a disease epidemic; confusing matters further is that an iOS version of the board game was released for iPad.note Later released on PC and console. Both games have a reputation for being fairly challenging. Interesting, eh?