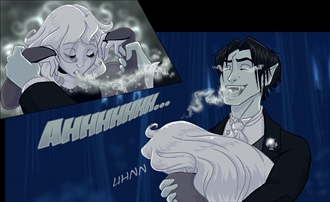 If she'd simply eaten the garlic, she wouldn't be in this mess.
Advertisement:

Vampiric Draining is a characteristic of certain supernatural creatures. These creatures nourish themselves by draining some vital element from living beings. It may be blood or other bodily fluids, mental or emotional energy, Life Energy or souls, or magical or spiritual power.

The effects of being the victim of Vampiric Draining depend on how much vitality the Vampiric Drainer took from you, and range from temporary tiredness to chronic exhaustion, to either shortening of lifespan or Rapid Aging (thus overlapping with Liquid Assets), to death. The victim may also transform into the same type of creature that fed upon them.

Draining Life Energy is a bit more common for "vampiric" creatures that are closer to the sci-fi end of the Magic Versus Science spectrum. The trope can also include "vampiric" weapons - that is, Evil Weapons that perform Vampiric Draining upon either their wielder or felled enemies/victims.

There are many motivations for draining others. Some of them include:

Super-Trope to Kiss of the Vampire (where the vampiric feeding is either tolerable or pleasurable to the "victim") and Vampire Bites Suck (where the feeding is not a nice experience for the victim). Subtrope of Fantastic Diet Requirement.

Particular types of draining can be found in Life Drinker, Emotion Eater, and Soul Eating.

Often overlaps with Horror Hunger. May involve Blood Lust if that's the substance that's drained. See also Our Vampires Are Different, and Supernaturally Delicious and Nutritious.

Not to be confused with Life Drain and Mana Drain, which are stealing Hit Points and Mana Points from an opponent for yourself respectively.

Living Battery is the Science Fiction equivalent of this trope.

Not to be confused with Cannibalism Superpower.