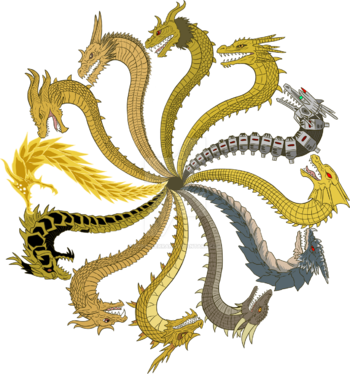 . Used with permission.
"Bow down and worship the Golden Demise."
— Metphies, Godzilla: The Planet Eater.

A character page for Godzilla's three-headed Arch-Enemy and all of its variants and subspecies. Godzilla's most persistent foe, King Ghidorah has appeared in every continuity, and his rivalry with Godzilla has a deeply personal edge to it. Generally portrayed as an absolute bastard, his origin varies depending on the continuity.

To return to the main character index, go here. For the Legendary King Ghidorah from the MonsterVerse, go here.

Due to Wiki Policy, this page contains numerous unmarked spoilers for each Ghidorah involved. You Have Been Warned. 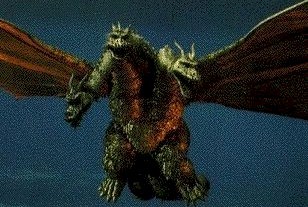 The King in Yellow.

In the Showa continuity, King Ghidorah is a rapacious space-faring alien dragon who wanders the galaxy destroying worlds for his own amusement. In the ancient past, Ghidorah annihilated Venus' advanced civilization and reduced the planet to an inhospitable wasteland. Arriving on Earth in a meteor, he is opposed by Mothra; who is eventually joined by Godzilla and Rodan. Repelled by the combined onslaught of the three monsters, Ghidorah retreats into space.

In subsequent appearances, he is mind-controlled and used as a weapon by various alien races, who hope to use him to help subjugate the Earth.

His appearance is partially based on Zmei Gorynych from Ilya Muromets. 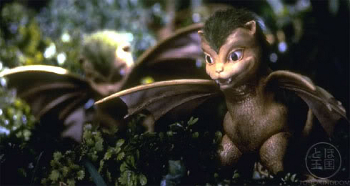 These small creatures are genetically-engineered pets of the Futurians. After relocating the injured Godzillasaurus from Lagos Island to the Bering Sea in 1945, Emmy Kano left three Dorats in its place on the island. There the creatures stayed until 1954, when the nuclear bomb test that originally mutated Godzilla instead caused the Dorats to fuse together and mutate into the Heisei incarnation of King Ghidorah.

In the Heisei continuity, King Ghidorah is born after the three Dorats left on Lagos Island are fused into a single three-headed dragon. Initially under the control of the Futurians, King Ghidorah is able to fight evenly against and even overwhelm the upgraded Godzilla, but after their control over him is broken Ghidorah loses his edge and is killed - having his middle head blown off and his wings torched. In the future, Emi recovers King Ghidorah's corpse and rebuilds it as a cyborg equipped with an internal command center. The revivified Mecha-King Ghidorah is then sent back to the present to try and stop the rampage of Godzilla, incapacitating him and dragging him to the bottom of the ocean before being destroyed.

Though Mecha-King Ghidorah has never appeared in any subsequent films, he has appeared in a number of videogames. 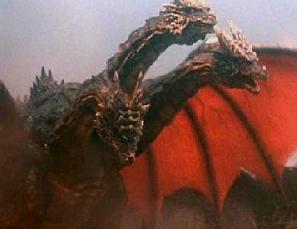 Returning to the roots of King Ghidorah, Desighidorah is a demonic space beast that ravages living worlds and leaves them as apocalyptic wastelands. Whereas the Cretaceous King Ghidorah had arrived on Earth 130 million years ago, his relative Desghidorah destroyed the population of Mars before moving on to Earth 65 million years ago, where he engaged the ancient civilization (good grief, how many of these did Earth have?!) of Elias and their guardians, the Mothras. Desighidorah was defeated and sealed away, but not before destroying the Elias, most of the Mothras, and the dinosaurs (and in eliminating the latter, finishing the job the first Ghidorah had started). In the present, he was released by one of the three surviving Elias, Belvera, and began his destruction anew, defeating Mothra and her son. The larval Mothra matured to Leo Mothra and battled Desighidorah again, defeating him and sealing him away once again. 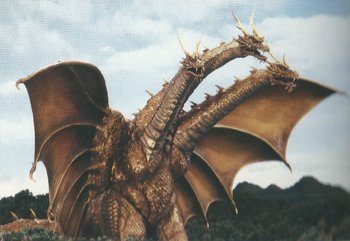 The King of Terror

In the Rebirth of Mothra series, King Ghidorah is depicted as a space-traveling living disaster that takes cruel delight in the destruction of life, arriving on Earth in the ancient past as Cretaceous King Ghidorah, and causing the K/Pg extinction event. Ultimately, this King Ghidorah is seemingly destroyed by Mothra Leo when he drops the alien dragon into an active volcano. However, a severed tail burrows away and regenerates into a the Modern-Type King Ghidorah — also known as Grand-King Ghidorah, who is even more powerful and is only vanquished when Mothra Leo becomes Armor Mothra.

First Appearance: Godzilla, Mothra, King Ghidorah: Giant Monster All Out Attack, 2001
AKA: God of the Sky
Portrayed by: Akira Ohashi

Vastly different from any other of Ghidorah's characterizations, in the Millennium era King Ghidorah is depicted as a guardian monster, as well as an immature Yamato no Orochi. One of the three Guardian Monsters, King Ghidorah is only concerned for the balance of nature and cares not for humanity (at first), and is awoken to fend off the revived Godzilla and put the souls of those lost in the second World War to rest. He joins Mothra at Yokohama in the night to confront Godzilla, but is ultimately overwhelmed and left vulnerable for Godzilla to deliver a fatal blow; however, Mothra sacrifices herself to save her comrade, and the energy of Mothra flows into the heavily-wounded King Ghidorah, reviving the great serpent and allowing him to carry on the fight with Godzilla; in which King Ghidorah opens a wound on Godzilla's neck. After a long battle, King Ghidorah is destroyed by Godzilla, but the wound he created is what ultimately causes Godzilla to destroy himself. 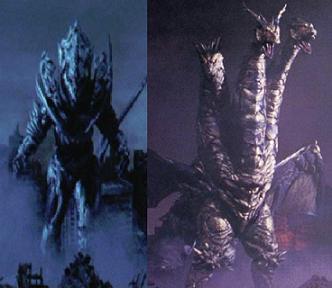 The last and most powerful monster Godzilla fought in Final Wars, or to put it more bluntly, the only monster in the film that could actually prove a match for him. Sent down in a meteor that destroyed Tokyo, he and Godzilla fight, Monster X initially holding the upper hand. The Xiliens then send an upgraded Gigan to make sure Godzilla dies, but Gigan is killed in the battle by Mothra's Heroic Sacrifice. After a Beam-O-War between Godzilla's atomic breath and Monster X's eye beams, which ends in a draw, Monster X transforms into the quadrupedal dragon Keizer Ghidorah and nearly kills Godzilla. Godzilla is saved however, by being sent power from the mutant soldiers, which allows him to overwhelm and kill Keizer Ghidorah. 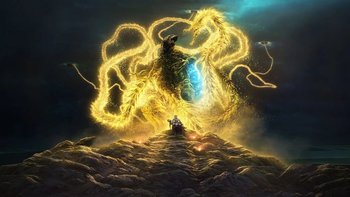 Ghidorah as he appears in the films, 3 golden heads projecting from another dimension. 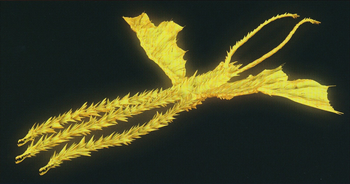 First appearance: Godzilla: The Planet Eater, 2019
AKA: The Golden Demise, Wings of Death, God of the Void

A godlike extradimensional monster that resembles a three-headed 20 kilometer-long dragon comprised of golden energy. Before the series began, Ghidorah destroyed the Exifs' homeworld and is worshipped by the survivors as a god of destruction, to whom they sacrifice planets. The Greater-Scope Villain of the anime, Ghidorah set the entire plot in motion to finally get his jaws on Earth. 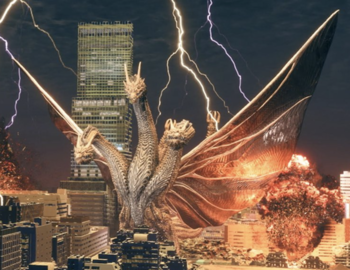