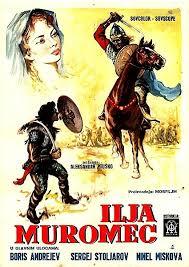 Ilya Muromets is a fantasy movie based upon the epic poems about a Russian epic hero.

Kievan Rus', led by Prince Vladimir the Great (Andrei Abrikosov), is under siege from the Tugar army, led by Tsar Kalin (Shukur Burkhanov). The giant knight Svyatogor bequeathes his sword to a group of pilgrims, telling them to find a young hero worthy of it; a few days later, they find Ilya Muromets (Boris Andreyev), who is immensely strong but has been paralysed since birth, and so could only watch when the Tugars abducted his crush, Vassilisa (Ninel Myshkova). His Patriotic Fervor makes the pilgrims decide he is worthy of Svyatogor's sword, so they cure him of his paralysis and give him the sword, and he rides out to join the fight against the Tugars. After defeating the gale-blowing demon Nightingale the Robber, he heads for Kiev to present his opponent to Prince Vladimir. The prince makes Ilya a knight in his service, in which capacity he meets fellow heroes Dobrynia Nikitich (Gyorgy Dyomin) and Alyosha Popovich (Sergei Stolyarov). A mission to the frontiers brings him into contact with the Tugars who abducted Vassilisa, and he frees and later marries her.

But the Tugars have a man on the inside in the form of the weaselly boyar Mishatychka (Sergei Martinson), who tells lies to Vladimir about Ilya's loyalty and ambition. Ilya is imprisoned, causing Dobrynia and Alyosha to quit the prince's service, and the pregnant Vassilisa is re-captured by the Tugars. Tsar Kalin decides to raise Ilya's son, Little Falcon, as his own, and when he is grown up, the Tugars march on Kiev. The chastened Prince Vladimir frees Ilya, who is able to delay the Tugars' advance until Dobrynia and Alyosha arrive with reinforcements, and the stage is set for a climactic final battle that sees the Tugars release the three-headed dragon, Zmey Gorynich...

Released in 1956, the movie was a literal epic for the Russian film industry, with tens of thousands of extras and thousands of horses used in some of the battle scenes. Then Roger Corman got his hands on the movie for a release in the early 1960s. While little was generally changed, the "epic" feel of the original is felt to have been lost rather tragically in the conversion. The movie is also known as The Sword and the Dragon in America, while The Epic Hero and the Beast is the UK name. Both are drastically changed versions when compared to the original, of course. A copy of the full version with English subtitles can be seen here

The film was directed by Alexander Ptushko, who also directed Sadko (The Magic Voyage of Sinbad in the USA) and Sampo (The Day the Earth Froze in the USA).

Fun fact: the three-headed dragon in this movie is one of the creatures King Ghidorah was based upon.