A character page for Mothra, the Shobijin (her twin fairies), and several similar and related characters.

To return to the main character index, go here. 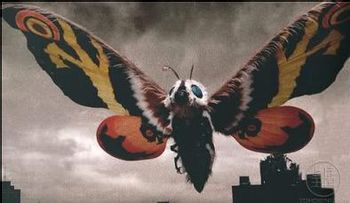 AKA: The Thing, Guardian of Peace, God of Water

Second only to the Big G himself in iconicity, Mothra is notable for being one of the few Kaiju that is, more or less, always a hero. A pseudo-demigod of a Pacific Island often accompanied by or called forth by her twin Shobijin priestesses, even in her/his (it depends on the film) more villainous roles, Mothra isn't so much 'bad' as angry. Do not touch Mothra's followers and definitely don't touch her eggs. Mothra is one of the few kaiju that has defeated Godzilla in battle with any frequency, and when Godzilla does kill Mothra, you can expect the larvae to show and avenge her.

A pair of tiny, twin fairies, who serve as the priestesses and caretakers of Mothra and her offspring on Infant Island. They often find themselves embroiled in the affairs of the outside world, and using their powers of telepathy to aid humanity in its various encounters with kaiju.

Debut: Godzilla and Mothra: The Battle for Earth, 1992 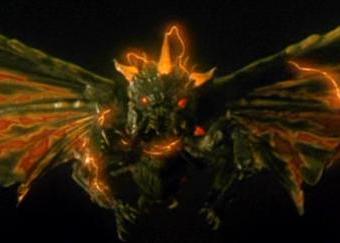 A dark version of Mothra, Battra is the protector of the Earth and its natural processes. However, he doesn't extend this to the creatures living on the planet, especially those that try to change or control the natural order. In ancient times, Battra destroyed the weather-control device of an advanced civilization and then devastated the population, drawing Mothra's ire. The two fought and defeated each other, returning to slumber until they were needed again. That time came in 1992, when a small chunk of an incoming asteroid impacted Earth, awakening Mothra, Battra and Godzilla. Battra sensed Mothra was awake and hurried to find her, engaging Godzilla in battle. After a series of battles, Mothra and Battra made peace long enough to defeat Godzilla, though Battra was mortally wounded and died carrying Godzilla to sea, and Mothra left into space to stop the asteroid in Battra's place. 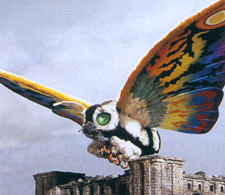 The star of the Rebirth of Mothra series of kaiju films, this Mothra is actually a male, a son of the previous Mothra to guard the world.

Leo's first battle came in the form of the space beast Deathghidorah (or Desghidorah), a beast who has a habit of killing life, and has struck Earth before in the time of the Mesozoic, killing off the dinosaurs. He would later be sealed away by the Mothras and their Elias, before being released by a mining team on accident. Upon release, Deathghidorah would begin killing life as he did millions of years ago. Leo's mother quickly begins battling Deathghidorah, but with even the assistance of her offspring, a male larva by the name of Leo, Deathghidorah is simply far too powerful for the aging deity, and Mothra retreats with Leo in tow. Mortally wounded by Deathghidorah, Mothra crashes into the ocean as Leo tries to keep her afloat, but eventually Mothra dies and sinks into the ocean's depths. Leo goes to an ancient tree and cocoons himself, ready to take revenge on Deathghidorah for slaughtering his mother. He emerges from the cocoon in the form of thousands of tiny, bioluminescent moths, and forms into the new Mothra; Mothra Leo. He immediately makes a beeline for Desghidorah in righteous fury and assaults his mother's murderer. Desghidorah could only attempt to defend himself against Leo's assault; and eventually, Deathghidorah's seal was renewed as Leo revived the land Deathghidorah had killed, then returned to Infant Island with Moll and Lora.

He would later end up being called upon by Moll and Lora to duel with the pollution-creating beast Dagahra, awoken by the increased oceanic pollution, as well as his toxic, starfish-like Barem; however, this time he will need the power of the lost castle Ninai Kinai, the same civilization that created Dagahra. Leo battles with Dagahra, but is ultimately defeated when the sea monster takes Leo into his element, the water, and covers him with Barem. Leo flees and lands the newly-raised temple, and as Dagahra attempts to finish off the incapacitated Leo, the castle itself activates and defends Leo from the sea monster's wrath. With Leo out of his way, however, Dagahra can go on a rampage unopposed. A while later, Leo is revitalized by Lora and Moll using Ghogo's energy, turning him into Rainbow Mothra, and promptly destroys the Barem covering his body. He then assaults Dagahra heavilly, and he turns into Aqua Mothra to pursue the sea monster when Dagahra retreated into the ocean. Now able to overpower the sea monster, Leo is able to split off into thousands of tiny versions of himself and destroy the Barem, and Dagahra with them. The temple crumbles away into the seas as Leo reforms into one whole Mothra, and then returns to his Rainbow Mothra form and leaves, as Lora and Moll follow on Fairy. Having saved the world once more, Leo returns to Infant Island with Lora, Moll and Fairy.

Leo would be called upon to save Earth one last time, but this was to be his most challenging battle ever. Moll and Lora call upon him to save the world from the formibable space beast King Ghidorah, who had previously visited Earth during the time of the dinosaurs, and is thought to have aided in the extinction that took place at that time. Leo attempts to battle the space demon, but is horrendously overwhelmed by King Ghidorah and barely survives the battle. Later, Lora is possesed by Ghidorah and attempts to attack Moll and Fairy, but the two escape before the possesed Lora can drag them into Ghidorah's pulsating organic dome, in which he is storing the children he abducts, and preparing to use them for a horrible purpose; to feed upon their life-force. Belvera and Garu-Garu are both dragged into the dome by serpent-like beings, and King Ghidorah then assaults the city. Lora, still under Ghidorah's control, attempts to kill Shota, a child they had met earlier on, and Belvera tries to reason with her. Lora takes Belvera's section of the Elias Triangle and merges it with Moll's, creating one large sword. Belvera engages in a swordfight with Lora. Meanwhile, Moll and Leo realize that Leo must travel back to the Mesozoic to defeat King Ghidorah at a far younger, weaker King Ghidorah. The two duel, with Ghidorah holding the advantage for most of the barttle, but eventually Leo manages to blast off one of Ghidorah's tails and drops the young Cretaceous King Ghidorah into a volcano. Unknown to Leo, the severed tail burrows into the ground and begins regenerating. Back in the present, Ghidorah reappears in a massive fireball, this being the severed tail of Cretaceous King Ghidorah, regenerated into a new body. Back in the Cretaceous, Leo re-emerges from the volcano close to death, but he is saved by his ancestors and re-emerges in the present in a new, armored form. The newly-emerged Armor Mothra re-engages with Ghidorah in the present and quickly overwhelms and destroys King Ghidorah, ending the beast's terror. Lora and Belvera use the sword to revive Moll, and the three sisters share a reunion. With King Ghidorah destroyed and the world safe once more, Leo sheds his armor and becomes Eternal Mothra, and he, along with a Fairy-mounted Moll and Lora, fly off into the sunset, returning to Infant Island once more, as the children are reunited with their parents, and Leo can retire from fighting.

A giant moth worshiped by the Houtua tribe. Before the series starts, she fought Godzilla several times before being killed. 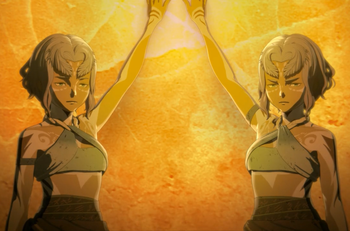 Twin girls who appear in Godzilla: Planet of the Monsters, Godzilla: City on the Edge of Battle, and Godzilla: The Planet Eater; they are members of the Houtua tribe and worship Mothra, making them the anime trilogy's equivalent of the Shobijin.