Anime / Godzilla: City on the Edge of Battle 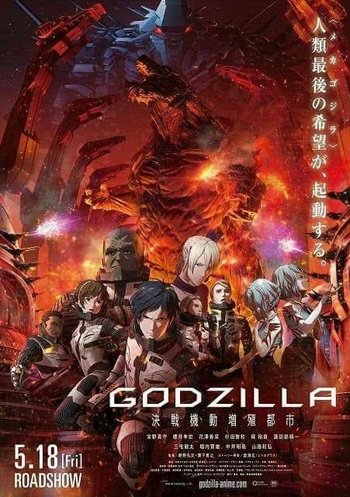 Humanity's last hope has been activated.
All monsters are called "monsters". As they cannot be defeated by "people". And to defeat what has surpassed human intellect, is outside the capacity of human achievement. The moment you decide to defeat Godzilla, you're aspiring to become something that is no longer human, Haruo.
— Mulu-Elu Galu-Gu
Advertisement:

Godzilla: City on the Edge of Battle is a 2018 post-apocalyptic Kaiju Anime sequel to the 2017's Godzilla: Planet of the Monsters. Written once again by Gen Urobuchi, produced by Toho's animation division, and animated by Polygon Pictures, it is the second installment in the Godzilla anime trilogy. The movie premiered on May 18, 2018 in Japan and was released worldwide on Netflix on July 18, 2018.

In the wake of the devastation inflicted upon them by the reawakened Godzilla Earth, the United Earth forces regroup and end up discovering the remains of the abandoned Mechagodzilla, and plan to fix it up for use against Godzilla. Meanwhile, Haruo awakes in the care of Miana, a girl from the Houtua tribe, remnants of humanity whose god was also defeated by Godzilla, only leaving behind a giant egg...

The trilogy is concluded in Godzilla: The Planet Eater.

Spoilers for Planet of the Monsters will be unmarked.