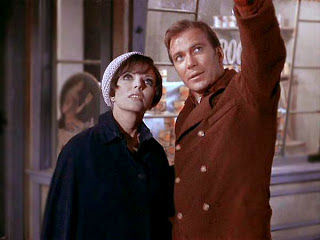 "'Let me help.' A hundred years or so from now, I believe, a famous novelist will write a classic using that theme. He'll recommend those three words even over 'I love you.'"
"As I'm watching the episodes for reference just before drawing each strip, I take notes on ridiculous stuff that I can make fun of in the comic. Things that pull me out of the story and make me think, 'That makes no sense. I can make a gag about this bit.' For most episodes I have anywhere between 10 lines and half a page of notes.

When this episode ended, I had written nothing."
— David Morgan-Mar, creator of Planet of Hats
Advertisement:

In the penultimate episode of the first season (credited to Harlan Ellisonnote who wrote the story but not the teleplay - see the Trivia tab for all the gory details), the crew of the Enterprise finds itself exploring a "temporal disturbance" near an unknown planet. Electromagnetic interference causes the ship's computer to explode, injuring Sulu. McCoy runs to prepare an injection of super-adrenaline for him, but turbulence causes him to accidentally inject himself and become Brainwashed and Crazy. McCoy escapes the bridge and beams down to the planet.

Following him, the landing party discovers a city of ancient ruins that appears to be uninhabited and empty except for a mysterious glowing green archway, which appears to be sentient and exhibits strange telepathic abilities, acts as a viewscreen displaying various scenes from Earth history. The archway, which calls itself the Guardian of Forever, explains that it is a portal to any place and period in history. It also easily steals Spock's Cultural Posturing crown.

The conversation with the Guardian is interrupted when McCoy runs through the archway and disappears. Moments later, Uhura reports a loss of contact with the Enterprise, and the crew realize that McCoy has somehow altered the course of history since entering the portal. In order to return to their ship and restore the original timeline, they must follow him and prevent him from doing whatever he did. Steeling themselves to find the correct moment in history, Kirk and Spock jump through the portal and arrive in New York City during The Great Depression, where the pair must disguise themselves while they search for McCoy. Unfortunately, their Starfleet uniforms (and Spock's Vulcan ears) attract unwanted attention. When the pair attempt to steal clothes, they are chased by the police and end up hiding in the basement of a homeless shelter run by the kind, idealistic and smart social worker Edith Keeler (Joan Collins). Keeler offers to take in Kirk and Spock and find them work, although she is slightly suspicious of their military demeanour.

While Kirk and Spock do menial jobs, Spock is able to construct a rudimentary computer using electronic parts he has assembled, which he uses to analyze his tricorder's recording of the historical scenes shown in the archway. Kirk and Edith begin to fall in love. Spock discovers a terrible truth: Soon after he entered the portal and arrived on Earth, McCoy saved Keeler from dying in an auto accident. Since she did not die as intended, she later became a peace activist and successfully convinced Franklin D. Roosevelt to keep America from entering World War II until too late, allowing the Nazis to win and preventing Starfleet from ever existing. Kirk and Spock realize that in order to prevent this from happening, Edith Keeler must die.

Meanwhile, McCoy has been running loose in the city, still affected by the drugs. After an altercation with a homeless man who steals his phaser and shoots himself with it, he is found and taken in by Keeler, who believes he is merely drunk. As he recovers from the drug's effect, he befriends her, unbeknownst to Kirk and Spock.

The following night — the night of her accident — Kirk takes Edith on a date to the movies. An offhand comment by Edith reveals to Kirk that she knows McCoy. When Kirk and Spock run into McCoy on the street, Edith walks into traffic to find out what's going on. Kirk instinctively moves to push her out of the way, but Spock insists he not interfere. When McCoy moves to save her, Kirk restrains him, and Edith is struck by a car and dies, returning history to its original course.

McCoy is shocked and furious, demanding to know why Kirk stopped him from saving Edith and if he knows what he's done. Kirk is too heartbroken to say a word, and Spock gently tells Bones that "he knows". With the timeline restored, the three are able to return to the planet through the portal, where the Enterprise has reappeared. Scotty expresses surprise at the short time that's elapsed since they left. The Guardian offers to show the crew more fantastic journeys, but an emotionally shaken Kirk simply states "Let's get the hell out of here" and prepares to have the crew beamed back aboard.

In 2015, IDW published a comic book adaptation of Harlan Ellison's original script of this story.

The Tropes on the Edge of Forever

"Many such journeys are possible. Let me be your gateway."
Feedback