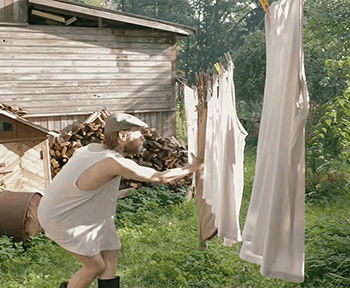 Typically a Comedy trope where characters, who are in need of new clothes, take spare garments from the next best clothesline. Bonus point if the scene involves a close-up on a piece of clothing slowly moving across the screen as the clothesline is being pulled from one end. Often the stolen clothes are the wrong size, intended for a person of the other gender, or both.

May be becoming a Forgotten Trope due to the increasing ubiquity of tumble dryers.

Sister trope to Mugged for Disguise and Stripping the Scarecrow. Compare Gone Swimming, Clothes Stolen, which can be either an alternative place to steal clothes when there are no washing lines around, or the reason why they need clothes to begin with. May involve Naked People Trapped Outside.