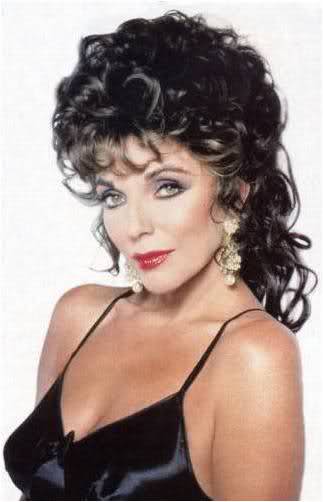 "I do it because I love acting, I love working, and whether it's radio, television, films, theater, I don't care as long as I can get out there and do it."
Advertisement:

Dame Joan Henrietta Collins (born 23 May 1933 in Paddington, London) is a British actress, most famous for her role as Alexis Carrington Colby Dexter on Dynasty (1981) and notorious, body-baring roles in two movies based on novels written by her sister Jackie Collins, The Stud and The Bitch. Also made a notable early appearance in Star Trek: The Original Series in the episode "The City on the Edge of Forever", as slum angel Edith Keeler.

For a good chunk of The '60s, she was married to Anthony Newley.

The following tropes have been featured in the work of Joan Collins: