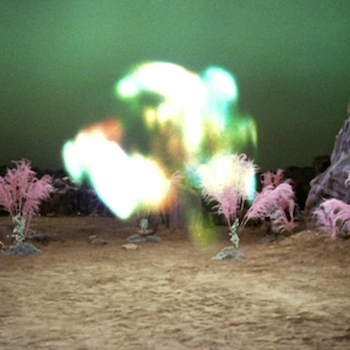 Would you believe this is the Big Bad of this episode?
Advertisement:

Instead of the usual trio, it's Kirk, Chekov, Bones and an unusually long lived Red Shirt who beam down to Beta XII-A, a planet of rocks and pink trees, to answer a distress beacon. While Kirk laments the hundreds of men, women, and children who have been murdered (mysteriously, without leaving any bodies or building wreckage) Spock reports a Klingon ship in orbit, apparently in distress. A small group of Klingons, led by Commander Kang (no, not THAT Kang) and his wife Mara (the first female Klingon to be aired thus far) beam down and accuses Kirk of attacking his ship and killing his crewmen. Kirk denies doing such a thing and brings up his counter accusation. Chekov accuses the Klingons (again, he calls them "Cossacks") of murdering his heretofore unmentioned brother, Piotr. Kang tortures Chekov and threatens to do more if Kirk does not surrender his ship to the Klingons. Kirk pretends to surrender, but sends a secret signal to Spock that only the Enterprise crew be beamed aboard, with the Klingon crew kept in stasis until security can handle them. Kang and his crew are detained in the lounge while a mysterious Anti-Tinkerbell looms nearby.

Tempers flare as Irrational Hatred overrides good sense. Klingons and Federation had always shared an enmity, but now it's getting out of hand! Boing! The chess set, some pool cues and the phasers have all turned into swords! Rather than question this turn of events, everyone decides to start swashing bucklers (yes, it is that way round).

Can two warring species drive a hate-fueled alien life form from a starship without driving each other crazy?

Day of the Tropes: