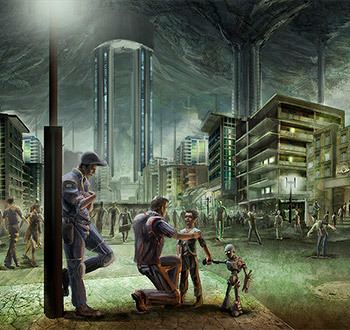 Proton looked up and saw the rocky cone of Mount Terror, the solar reflector leaning over the armorcrete rim, and the curved magnalloy blades of a blast iris retracted into the sides. The purpose of this construction was suddenly clear. They were inside a depthscraper — a legacy of the time when entire cities were built underground in fear of another atomic war.
— Plan 7 of 9 from Outer Space
Advertisement:

A full-fledged city that lies Beneath the Earth. It's a civilian form of Elaborate Underground Base and comparable to an Underwater City. The underground city is more than a collection of refugees hiding in abandoned sewer and subway tunnels; it has markets, mines, homes and possibly even farms (either of mushrooms and stranger fare or sophisticated hydroponics).

Typically these cities come in a few flavors:

The underground city is very often a Hidden Elf Village and is only rarely part of a larger network of interconnected cities. Usually each is a one of a kind sovereign and isolated city state. In contrast, one way in which Our Dwarves Are All the Same is that they tend to live in a network of underground cities.

In video games, these can be an Underground Level.

Compare Under City, which is an old section of a city that was once above ground but is now underground.

Heartstone Trollmarket is the underground home of the trolls beneath Arcadia, California.

Heartstone Trollmarket is the underground home of the trolls beneath Arcadia, California.