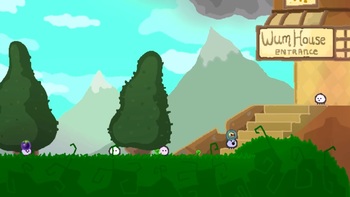 These are the Wum, Blussers, Splenkhakkers, and Fnakkers.
The second they arrived on the planet, the Fnakkers decided they wanted to rule it!
Immediately, a war started. The other three races bundled their powers and pushed the Fnakkers down a sinkhole...
— From the Announcement Trailer

Welcome to the Wondrous World of Wuppo!

Wuppo is a 2D Indie action platformer developed by Knuist & Perzik, a two-man team from the Netherlands. Development began in 2009, officially releasing on Steam in September 2016 with several trailers (and even a contest) in-between. You can find its Steam page here

Taking place in a bright, colorful, hand-drawn world, Wuppo focuses on the story of a lone Wum traveling the world in search of a new home. You'll fight numerous enemies, encounter charming creatures, collect countless items, and uncover secrets about the world's rich history all while listening to an ever-changing soundtrack by Thomas de Waard. The game can loosely be described as a platforming adventure-game hybrid, with the game putting lots of emphasis on dialogue and exploration, with the occasional boss fight to spice things up. Notably, the game contains many simulationist elements, such as a train system that runs real-time independently of the player, a Day-Night cycle, and a theme park that features lines you have to physically stand in while waiting for your turn on the rides. All of this adds up to create a world that is surprisingly detailed and well realized for a game as simple-looking as this.

, and its Kickstarter page is here

&& The shop outside of the Wumhouse lets you swap your Gumgumgun out for an electricity cannon. It's identical in function, just with flashy new sounds and effects.
That was pretty magical, wasn't it? How about another one?