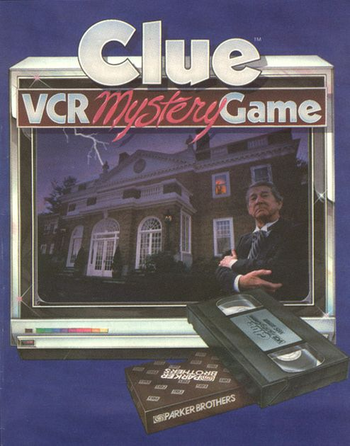 "...even earlier than the very first CD-roms, you could still find a ton of full-motion video games — in the form of board games that is."
— The Spoony One, "Black Hole of Board Games: Nightmare"

Back in The '80s, several video companies took advantage of VCR technology to develop games that used both video and board game elements. Many of which were adaptations of existing properties.

The medium managed a surprising diversity in both the genre of videos used and in the genre of gameplay used. Some Action-Adventure videos hybridized with Light Gun Game toys/controllers, while others used traditional Board Games or specialty cards. The video was also used in several ways, including a Framing Device, a way to introduce random elements, and a timer.

The rapid development of consoles and PC games rendered this medium obsolete, as many of the video elements could be incorporated into Point-and-Click style computer games. The more unique elements of this medium actually do survive via the newer Toys to Life genre.

Examples of this medium:

Examples of this medium in fiction: