Our Humans Are Different 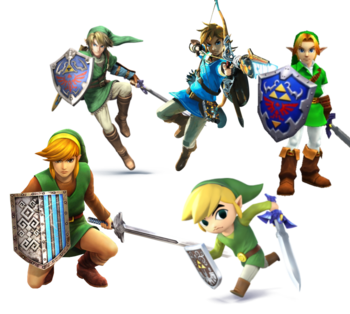 Link, an example of a Hylian
It might not look like a human or talk like a human, but it's still a human, at least by name. Even if they have Pointy Ears, a rubber forehead, or Psychic Powers — so what? So do all the other humans they know.

Basically, this is what you get when you call a smeerp a human.

So maybe you have an idea for a novel and want it to be original. Maybe you have seen too many stories with Our Elves Are Different or Our Monsters Are Different plots and want to make things interesting. Maybe you want to create a fantastical race but you don't want to just recycle the same ones that everyone else has already used.

The problem with making up an entirely new race is that it can be hard, especially since so many things have already been done before. This is probably why so many writers recycle the old races in the first place. Recycling old races also has the bonus of saving the writer the trouble of explaining things as much. Saying a creature is an elf, for instance, prepares the reader for the fantasy genre without the writer having to mention said genre, as well as drawing on preestablished conventions to allow the reader to quickly grasp what elves are like without having to devote quite as much page space to fleshing things out.

So what if you want the benefits of using a recycled race in a fantasy story but don't want to use elves or dwarves? What if you think that having a bunch of humanoid races who are called something not-so-human strains the Willing Suspension of Disbelief?

Well, you could just make up a fantastical race anyway and call them humans.

This trope is for when you want enough fantasy elements to make your story pop in your selected genre, but you don't want to make it as crazy as, say, Dungeons & Dragons. Maybe Middle-Earth is a little too racially divided, and you want your story to have a different feel.

It is important to note here that humans are the most common race used in fiction (probably because, well, Most Writers Are Human). Humans are usually considered to be the most mundane of all the other races, because to us, well, they are. In this sense, "mundane" is less about what is magical or not and more about what is "normal" or not.

Indeed, it might also be that a writer is tired of humans' hat always being that they're an average and unremarkable middle point between other fantasy races, or always like real-life humans even in fantastic fictional worlds, and wants to give them some special traits of their own.

It is also important to clarify what is meant by the word "human". Does the creature even have to look humanoid at all or does the writer have the right to call it human anyway, no matter what it looks like? This is made especially complicated by the fact that humans seem to be able to procreate with anything (Half-Human Hybrids, anyone?).

Ways to show that your humans are different:

Please note that this trope relies on the humans themselves, not any events surrounding them. Creating an Alternate Universe with Crystal Spires and Togas, for instance, does not make your humans different unless it is explained in-story that humans are Perfect Pacifist People who like to build utopian societies on a genetic level.

The opposite of Humans by Any Other Name. Contrast Human Aliens (aliens which appear indistinguishable from humans but are explicitly not) and Ambiguously Human (which is for when whether a character is human or not is not always explicitly mentioned in-universe). See the Not Quite Human index for a list of common traits that might make your humans different. Also see Humans Are Indexed for tropes about humans in general.

Compare and contrast Human Subspecies (which may or may not look like standard humans but are genetically related), Witch Species (which may be either of the above but are primarily distinguished by their ability to do magic where other people can't), and Bizarre Human Biology (which is about individual humans with strange biologies). See also Superpowerful Genetics, Randomly Gifted, The Gift, and Our Mages Are Different, although not all wizards (or Jedi, psychics, mutants, etc.) are necessarily human in the first place. Whether or not Original Man, human-descended Mutants, Differently Powered Individuals, and Posthuman Cyborgs qualify or not tends to vary depending on the setting and specific example.

While it can be difficult to draw a hard line, generally this trope is only in play when a significant proportion of greater humanity is different, not just a few special individuals — The Chosen One or even The Chosen Many are not examples of this trope (although The Chosen People could be).