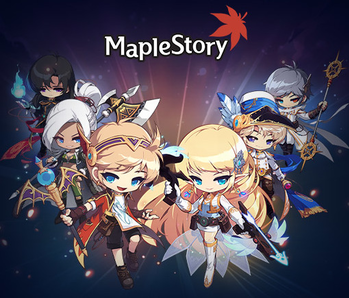 MapleStory is a free-to-play side-scrolling 2D MMORPG from South Korea that is both loved and hated for its unique graphics reminiscent of 16-bit games. Oh, and there's also an anime version, which has a plot with nothing in common. Like most MMORPGs, MapleStory is crawling with all sorts of people, including (but not limited to) kids, tweens, teens, adults, noobs, hackers, people who take it too seriously, and normal people who want to have fun.
Advertisement:

The various in-game regions found in MapleStory have differing backgrounds and plots. In order to really notice this information, the player has to finish certain quests and then connect the dots while looking through their completed quests log. These quests can be fairly boring since most of them are fetch quests requiring you to collect 20 Bear Asses. However, some quests are worthwhile and have good rewards, but you won't know this until you look at your 'In Progress' quest log AFTER accepting a quest (which most of the time shows the reward) or reading a quest guide on the internet beforehand. Interestingly, a few quests actually have some unexpected plot twists in them, but these tend to be ignored since the player is just clicking "Next" and not reading the text.

Later MapleStory expansionsnote As early as the release of the fifth Adventurer class, the Pirate, with many quests in the Nautilus referring to the Black Mage start to expand upon the game's plot, and reveal that an entity called the Black Mage, his Commanders, as well as an affiliated organization called the Black Wings, are responsible for the activities of some of the major bosses, as well as the chaos happening within the regions where these bosses reside.

In 2018, Nexon announced the BLACK update which finally added the Black Mage as a boss and a new area that will see the end of the long-running main plot of the game.

There are currently six main character factions: the Explorers, the Cygnus Knights, the Heroes, the Resistance, the Nova Race, and the Flora Race. All of them have been affected by the Black Mage in some way, with some factions having morenote the Legends and the Resistance and some lessnote Adventurers to do with him. These character factions are simply organizations, and are unrelated to the different job classes available for players to choose in the game. The 5 main job classes are the warrior, magician, archer, thief, and pirate, each of which has its own further sub-branches (ex. the paladin and the hero are different classes, but both fall under the "warrior" branch). Each class has a weapon type unique to it, even some sub-classes having their own unique weapons, such as the Japanese katana for Hayato. Hayato is classified as one of the "warrior" classes; however, other non-Hayato warriors cannot wield the katana.

A fair word of warning while interacting with others in MapleStory: To a significant amount of players in this game, just about anything can be grounds for some Serious Business.

In short: Picture a 2-D Ragnarok Online and you get the idea. It is now available on Steam.

A sequel/reboot, Maple Story 2, was released in Korea in 2015, then in China in September 2017 and the rest of the world in October 2018. As opposed to the original game, MapleStory 2 is a 3D action MMORPG with a Minecraft-esque blocky voxel aesthetic and a greater degree of emphasis on customization and player creativity.

Now has a character sheet here.

Not to be confused with Cave Story or Maple Town.

You have read TV Tropes for 3 hours. We suggest you take a break from the Wiki Walk.