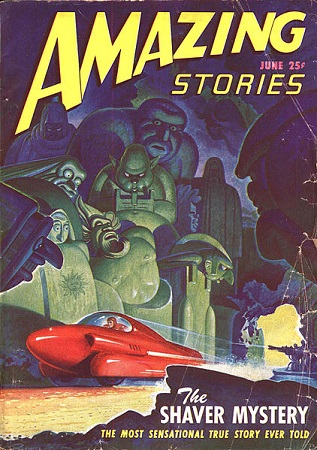 Intrigued? Let's start at the beginning.

about a man held captive by monstrous subhuman creatures that lived beneath the Earth. The story became so popular that Amazing Stories ran almost nothing but sequels and other related material for some time afterwards, to the dismay of some of their readership, including a young Harlan Ellison. After the craze had run its course, Shaver abandoned writing to pursue an interest in geology and died in 1975.

Pretty standard stuff so far, right? That's because we haven't gotten to the good part.

Richard Shaver maintained that he wasn't writing fiction. Following a workplace accident, he became convinced that he'd gained the power of telepathy and could hear not only the thoughts of the people around him, but secret conversations between the monsters described in his stories (which he named "Deros", short for "detrimental robots") and the anguished screams of their human victims. He sent his work to Amazing Stories as a warning to mankind, but his publisher, Ray Palmer, saw gold and edited his manuscript to make it fit the magazine's style.

Sure enough, the story was a hit — and not only with readers who enjoyed Shaver's work as fiction. Scores of letters began pouring in from people claiming to have had similar experiences as Shaver, hearing or having been captured and tortured by the Deros. So-called "Shaver Mystery Clubs" started popping up around the globe where believers in Shaver's mythos could share their experiences, some of which are still extant. Over time, the Shaver Mystery grew to include other elements, each more fantastical than the last, including Teros ("good" counterparts to the evil Deros; humanoid cavern dwellers who liberate the Deros' human captives) and the notion that the Deros were in contact with alien invaders (a response to the Flying Saucer craze of The '50s) and plotting to exterminate the human species.

Oh, and Shaver's interest in geology? He thought he could read Tero and Dero hieroglyphs in the rocks.

Deros themselves seem to have fallen by the pop-cultural wayside, supplanted by The Grays (and more recently, the Reptilian Conspiracy) as the ultimate hub of Conspiracy Theories, but they still crop up now and then among devotees of pulpy weirdness. Dungeons & Dragons and, even more centrally, its spinoff Pathfinder both feature "derros", and they turn up in Japanese horror movie Marebito too, while Jordan Peele's horror movie Us also depicts a subterranean world of machine-like half-people. Even Harlan Ellison got over his frustration with dero-mania, at least briefly, with his short story "The Elevator People" presenting a very Shaver-like scenario.

While Shaver's work has had a long-term impact on weird fiction, it has been suggested that he himself was influenced by the film serial The Phantom Empire, which also describes an advanced subterranean civilization.

Not to be confused with Richard Sharpe the fictional English soldier.

Tropes in the Shaver Mystery include: