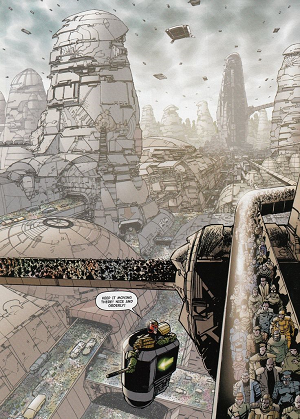 "I was born in apartment block Seven of Nine, in the Tertiary Adjunct of Unimatrix Zero One," replied Annika in a clipped tone. "An arcology so large it contained the entire population of Greater Germany — the builders had to fill in the North Sea just to provide parking space."
— Plan 7 of 9 from Outer Space
Advertisement:

A city whose population and physical size are massive, not just in raw numbers but in density. The actual size can depend on the average city size of the setting, but for modern or sci-fi settings, you can assume that the number of citizens goes into the hundreds of millions or even billions.

Depending on the setting you can expect to see a lot of tall buildings, endless suburbs and futuristic ways to get around. If you are lucky the author may have even thought of the troubles with providing food and water for all the inhabitants as well as the problems for the environment so many people naturally generate. If you are unlucky however, the heroes may find themselves alone at times and places where that should be impossible given the population density.

The Mega City will probably be the capital or Hub City, and if it's not a Merchant City, there'll definitely be a Bazaar of the Bizarre if you know where to look.