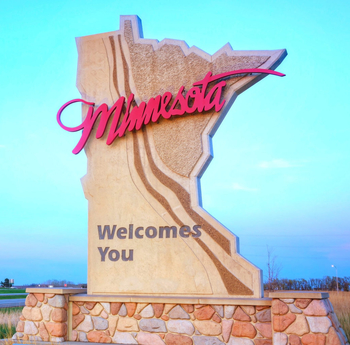 Minnesota is a northern state in the Midwestern region in America. It borders Wisconsin to the east, Iowa to the south, North and South Dakota to the west, and the Canadian provinces of Manitoba and Ontario to the north. Often called "The Land of 10,000 Lakes" due to its... well... Lakes.

The state was founded in 1858 and was the 32nd state to join the United States. It got its name from the Dakota word "Mnisota" which means "clear blue water". The state soon became a popular destination for Scandinavian immigrants.

Most Minnesotans live in the Twin Cities of St. Paul, Minneapolis, and surrounding suburbs. However, outside of the Twin Cities you have smaller cities like Rochester, Duluth, St. Cloud, Fargo-Moorhead, and Mankato. The rest of the state is either farmland or wilderness.

In terms of politics and culture, Minnesota is a very progressive state, with the majority of voters voting for Democratic candidates. It was the only state that did not vote for Ronald Reagan in 1984,note The main reason being that Walter Mondale was from Minnesota. and the last time it voted for a Republican was in 1972.note when Richard Nixon was the candidate and the Republican Party was a lot more progressive than it is today. Minnesota is known for being more accepting of minority cultures, although racism and bigotry still exist in some places and the wealthier areas are mostly white. Despite this, diversity is growing in certain places like St. Cloud, Willmar, and Worthington. Across the state there are thriving Native American, Hispanic, Black, and Hmong communities, and Minnesota boasts the largest Somali-American population. Minnesotans are also more accepting of LGBT people with support groups and medical centers for trans people at the University of Minnesota.

Minnesota-based media has its fair share of unique tropes. Minnesota Nice is the obvious culprit, but there are other, smaller ones as well. For example, many creators seem to think Minnesota has a lot of mobsters (Fargo being the prime example).

Notable Minnesotans include Charles M. Schulz, Prince, and Bob Dylan. Others such as Judy Garland, Chris Pratt, and Jessica Biel were born in Minnesota and later moved away.

The state also has a small but thriving film industry, and in the 1980s became the first state to offer tax incentives to bring in more film productions.