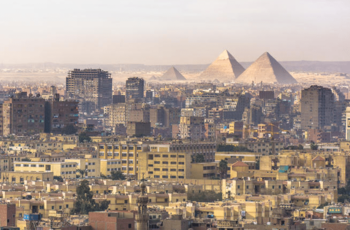 Cairo is the capital city of modern Egypt.note Supposedly, a new city to Cairo's northeast

is supposed to take over as capital sometime in the 2020s. An Egyptian will say, "And the New Valley

produces a quarter of Egypt's agricultural output." At 20 million people in its greater metropolitan area (which includes the governorates of Giza and Qalyubiyya), it is Africa's largest urban area, and the world's second largest Muslim-majority metropolitan area (after Jakarta and ahead of İstanbul and Karachi). It also happens to sit near the middle of the Arab World, and is thus a major Arab and Muslim cultural center. When a movie is dubbed in Arabic, you can bet that everyone will suddenly be from Cairo.

Cairo sits next to the only extant Wonders of the Ancient World, the Pyramids of Giza. This allows many to assume that Cairo dates back to Ancient Egypt, but the city is only about a thousand years old. However, the area has often been the site of an Egyptian capital, including the first capital of an united Egypt, Memphis; and the Roman fort of Babylon, which was the main military garrison of the Eastern Roman Empire in Egypt. The location almost immediately south of where the Nile splits up into its Delta—or in other words, right at the border between Upper and Lower Egypt—is highly strategic. This position makes it a natural place from which to govern the country—Lower Egypt tends to be more populous and more economically important than Upper Egypt, for a variety of reasons (including Lower Egypt's proximity to Mediterranean trade routes and the fact that it is a lot wider—Upper Egypt is a narrow ribbon, but Lower Egypt has some actual area to it).

The story of Cairo is generally considered to have begun with the Muslim conquest of Egypt in 642, when the traditional capital was still Alexandria. The Muslim armies needed a base and the administrators needed a capital; Alexandria being too vulnerable to Byzantine naval assaults, it was decided that the capital should be inland. The armies took over Byzantine Babylon; they then expanded it into a settlement called (Al)-Fustat, meaning "(The) Tent", supposedly because a dove had landed in the commander's tent there and laid an egg. Over the next few centuries, the city was expanded a few times by various dynasties, responding to population pressure and to security concerns (each dynasty wanted to have a big section of city for itself and its court). Finally, in 969, the North African, Shiite, Fatimid Dynasty took over Egypt. Recognizing that as Shiites they weren't exactly welcome in majority-Sunni Egypt, they wanted to make sure that the palace was far from the masses; to this end, they established a new palace-district "city" adjoining the old ones: Al-Qahira, meaning "The Conqueror". This new name eventually came to be applied to the whole agglomeration. However, Italian traders couldn't be bothered to pronounce that, so they just called it Il Cairo. And now you know.

Since its establishment, Cairo has almost always been the capital of Egypt, and has shared in Arab Egypt's rising and falling fortunes. At one time, it was the largest city outside of China, but changing trade routes, the Black Death, and eventual domination by the Ottoman Empire lessened its importance.

The decline of the Ottoman Empire allowed rapid modernization during the 19th century, but the debt resulting from the improvements was so crushing that Cairo and Egypt were added to the British Empire in 1882, and would remain a British "protectorate" until de jure independence in 1922 and de facto independence in 1952. Cairo entered a period of explosive growth.

From 1952 onwards, the city continued to grow and become a major global city. However, it has long stifled under a series of strong-arm presidents, culminating with Hosni Mubarak, who ruled Egypt for 30 years before being dramatically and unexpectedly ousted by the Egyptian people themselves during the Arab Spring. Now Egyptian society is in flux, with Cairo remaining center stage in an act that will define Egypt, and perhaps the Middle East at large, in the modern era.

As noted, Cairo is huge: 10 million people live in the city proper. The Greater Cairo area also contains two of the world's largest suburbs: Giza to the west at about 3.5 million is usually in the top four (along with Yokohama, Incheon, and Quezon City)note A few include New Taipei and Ekurhuleni, but New Taipei is just the old sprawl surrounding Taipei incorporated into a single municipality, while Ekurhuleni is larger than Johannesburg—it's simply that Jo'burg is denser and more economically significant. Also local government in South Africa is weird. and Shobra El-Kheima at 1.1 million in Qalyubiyyah to the north. Cairo is also a mess; the city is completely unplanned, so while small neighborhoods might have some semblance of order, getting around the city sometimes even confuses natives. Traffic is hell, too, and public transit can be rather difficult (although the Cairo Metro is decent and expanding coverage), particularly for a non-local. Nevertheless, it is without question the heart of Egypt; if you can't find it in Cairo, you probably can't find it anywhere in the country.

Cairo is often nicknamed "the city of a thousand minarets" owing to the very large number of mosques in the city (it is one of the few major Arab cities founded by the Muslims).