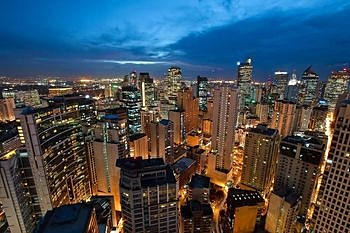 The Manila skyline at twilight.
"Manila, Manila
I keep coming back to Manila
Simply no place like Manila
Manila, I'm coming home."
—Manila

When people (particularly foreigners) talk about Manila, the capital of the Philippines, they don't simply talk about a city — they talk about a conglomeration of seventeen local government units (sixteen cities and one municipality, under the aegis of the eponymous City of Manila), officially designated by the Philippine government as the National Capital Region (NCR). Like San Francisco, Manila is also a "City by the Bay", owing to its strategic location at the innermost end of a natural harbor.

Once a Muslim kingdom on the banks of the Pasig River (which drains from nearby Laguna de Bay) ruled by rajahs and trading with the Chinese, Japanese, Indians and Malays, Manila never went unnoticed by an island-hopping Spanish fleet, whose leader, Miguel López de Legazpi, personally led its conquest in 1571, and upon the ruins of the old Muslim kingdom he founded Manila as it is known today.

Manila flourished as the capital of the Spanish East Indies (which included modern-day Palau, Guam, the Northern Marianas, and the Federated States of Micronesia), including a two-year stint under British rule in 1762-1764, a product of the Seven Years' War between Spain's ally France and Britain. Manila also flourished as the western terminus of a once- or twice-a-year trade fleet to and from Acapulco in Mexico, using some of the largest galleons in Spanish service to silver from the New World mines to Asia, along with some other items (possibly including the Far East's first chili peppers), and send Asian goods (and particularly Chinese goods) to Spanish America (and, sometimes, on to Spain itself).

By the time the Americans occupied the Philippines as part of a peace deal with Spain after the Spanish-American War, what was considered Manila was but a fortified city (now the aptly-named Intramuros district of the City of Manila) on the southern bank of the Pasig surrounded by small settlements on a vast flatland. This setup gave the Americans the idea of giving Manila a makeover. Under Daniel Burnham, the same man who designed modern Chicago, a southern clearance for Intramuros was developed to become the national capital zone, with the capitol on the eastern end, facing Manila Bay to the west, and a granite monument to Jose Rizal, reformist executed by the Spanish on that same field on December 30, 1896, at the center. However, in 1938 then-President Manuel Quezon, fearing Manila's vulnerability to enemy attack, scuffled the rest of Burnham's plan (save the already-redesigned field) in favor of a new capital 10km to the northeast, purchasing land from the influential Tuazon family and naming it Quezon City.

And Quezon was oddly correct — in 1941, days after the attack on Pearl Harbor, Manila was attacked by the Japanese. But that was just a foretaste of something even worse. Between November 1944 and February 1945 Manila saw the most destructive battle of World War II's Pacific front. The Americans retook the city, but at the cost of 1,000 Americans, 16,000 Japanese, and 100,000 civilians, and a city devastated beyond repair, surpassed only by Warsaw. After the war, reconstruction was hasty, and the result is a melange of subdivisions and shantytowns (colloquially called either "squatters" or the more politically correct "informal settlers") across the City of Manila and its neighboring cities.

Metro Manila as a political entity came to be in 1975 when then-president Ferdinand Marcos created the Metropolitan Manila Commission (now the Metropolitan Manila Development Authority, or MMDA). The original four cities (Manila, Quezon City, Caloocan, and Pasay), were joined by 14 cities and towns excised from the province of Rizal along with Valenzuela, which was taken from the province of Bulacan. Most of the former towns would eventually gain cityhood in the 1990s and the 2000s, with San Juan (2007) being the most recent of them. For statistical purposes, the entities in NCR are grouped in districts based on the said original cities.

One thing notable about Manila is that it has virtually no main city center when it does not refer to the City of Manila itself, as each of its seventeen cities has its own functioning government. As a result the NCR is something of an urban planner's worst nightmare, with mayors frequently disagreeing on basic issues concerning the metropolis. The major thoroughfares linking the region include C-5 and EDSA (formerly Highway 54), remnants of the earlier American-era city plans. Its extensive urbanization also frequently leaves most of the metropolis at the mercy of floodwater and typhoons (as hurricanes are called in the Asia-Pacific region), not to mention parts of it sitting on top of a still potentially dangerous fault line.

Metro Manila's discordant nature, however, can also tend to work to its benefit. The City of Manila is the cultural and political center (and home to the President), while Quezon City houses most government offices (a vestige of being capital from 1945 to 1975). Makati and Taguig serve as the nexus of the Philippine economy, while Pasig serves as a viable alternative. Pasay is home to the metropolis' airport. Caloocan, Navotas, Malabon and Valenzuela to the north, San Juan and Mandaluyong to the center, and Pateros, Parañaque and Las Piñas to the south, are mainly middle-class suburbs, and southern Muntinlupa is home to the rich and famous.

The Component Cities of Metropolitan Manila

The oldest of the area's seventeen local government units, and one of the four original cities of the region. The city itself is generally divided into 16 districts:

South of the Pasig River are:

North of the river are:

The largest city in the metropolis both in terms of geographical size and population, Quezon City was established in 1939 to replace Manila as the national capital, as the then-President and namesake of the city, Manuel Luis Quezon, as he thought that Manila is very susceptible to a naval attack due to its proximity to the shore note  it turned out, however, that the invading Japanese attacked by air, making his whole argument moot, as Quezon City wasn't spared from the invasion and remained the de jure national capital note  Most Government Offices remained in Manila before and after the War until President Ferdinand Marcos reinstated the title to Manila in 1975. While building a new Capitol and Government Complex in Quezon City. Vestiges of its past role remain in the form of most government agencies still holding office there.

A middle-class city whose eastern end is an extension of Ortigas Center, and hosts its three malls — SM Megamall, the second-largest in the nation (and fourth-largest in the world); Robinsons Galleria, site of a peaceful 1986 protest that ousted Marcos from power; and Shangri-La Plaza Mall, the branch of a high-rise hotel. Mandaluyong is also home to the nation's largest psychiatric institution, the National Center for Mental Health; to this day, when people say about "that hospital in Mandaluyong", they refer to that institution.

A city situated on an earthquake-prone valley around the Marikina River, the city is most famous for contributing to 70% of the nation's shoe-making industry and its environment-conscious policy.

A residential-industrial city whose western end was transformed into the finance and commerce-oriented Ortigas Center, with upscale residences to the east.

A highly parochial city taking pride of its self-sufficiency. The first shots of the Philippine Revolution were fired on a Spanish armory atop the hills of Pinaglabanan. The city's eastern side also hosts its only major shopping center in the upscale Greenhills area; coincidentally, many wealthy Chinese-Filipinos and their descendants also live around that vicinity.
Third District
The northern part of the region, better known colloquially by the portmanteau term "CAMANAVA" note  Caloocan, Malabon, Navotas, and Valenzuela.

A city divided into two by nearby Quezon City (which was carved off some of Caloocan's territory) — a southern half, where the local government is situated, and the mostly residential northern half. Much of the city's commercial activity is centered in Monumento, a roundabout crossing in southern Caloocan surrounding a monument to Andres Bonifacio, leader of the Filipino Revolution.

A low-lying city known for long periods of flooding and a noodle dish delicacy ("pancit") named after itself.

Malabon's neighbor and site of the Philippines' largest fishing market.

An economic-industrial city, majority of whose residents hail from provinces north of Metro Manila. Unlike the rest of the local government units which are formely part of Rizal, Valenzuela was taken from the province of Bulacan when the NCR was formed.
Fourth District
The southern portion of the region. Parañaque, Las Piñas, and Muntinlupa, in particular, are collectively referred to as "The South" largely thanks to their relatively distant geography.

A quiet suburb bordering the province of Cavite. Its main claim to fame is its principal Catholic church, which boasts an organ with pipes made of bamboo.

The southernmost city in the area, Muntinlupa is something of an odd mix. The eastern area, facing Laguna de Bay, is a middle-class zone (with the southern part being the seat of local government), the northwest area is a bustling commercial-corporate zone centered around Festival Supermall, the west-central area is host to Ayala Alabang, an exclusive upper-class village, and the southwest area is a middle-class zone and site of New Bilibid Prison, the nation's largest penitentiary, built in January 1941 to replace the one in Santa Cruz, Manila (now Manila City Jail).

A mostly quiet area of subdivisions and suburbs, and site of the southern half of a Manila Bay reclamation project, and home to the Philippines' largest casino complex, City of Dreams.

The odd one in Metro Manila, Pateros is the only municipality in the region, as well as the smallest both in population and size. Its name alludes to either its duck-raising or shoemaking businesses that date back to the Spanish era.

Originally a residential area, with many of its residents being soldiers and their families living near Fort Bonifacio, headquarters of the Philippine Army, Taguig got its big break when the Army sold large portions of its (mostly unused) land to businessmen, who developed the area into a viable alternative to Makati City note Fort Bonifacio is subject to a three-way territorial dispute

between Taguig, Makati, and Pateros, though is de facto, and in a 2021 Supreme Court ruling, de jure administered by the first. Taguig is also the site of two World War II cemeteries: one for the Americans (the largest of its kind in the Pacific front), and the other for Filipinos. Currently home to the national stock market, which relocated from Makati and Pasig in 2018.