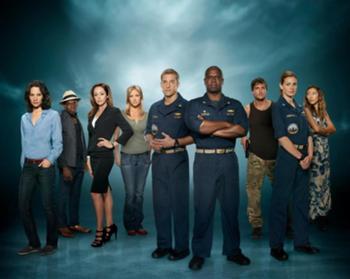 Last Resort was a 2012 television series produced by Sony Entertainment and airing on ABC. The pilot aired September 27, 2012, and the series concluded with the airing of its 13th episode on January 24, 2013.

The story follows the crew of the U.S.S. Colorado, a nuclear-armed ballistic missile submarine. The crew is celebrating crossing the Equator when they receive orders to fire four nuclear-tipped ICBMs at Pakistan. When the captain questions this order, he is relieved of command. The Executive Officer also requests confirmation, after which the submarine comes under attack - by another American submarine. Suspecting that they are being set up in a False Flag Operation, the Captain and Executive Officer decide to surface near the fictional island of Sainte Marina to figure out what is really going on.

To readers familiar with US Navy submarines, the Rule of Cautious Editing Judgment applies: With the sensitive nature of the locations, namely a United States Navy nuclear submarine, you can be assured that the accuracy of scenes isn't perfect. Access to nuclear-armed submarines is limited to those service members assigned to her after she is completed. As a result, it is likely that the producers relied on consultants and publicly available information. Anything they couldn't verify is more than likely speculation as far as the depictions of life on a nuclear submarine are concerned.

Sadly, on November 16, 2012, ABC canceled the series, but all of the episodes of the first season were aired. The showrunner indicated on Twitter that the series would have a conclusion, allowing the series to avoid the Cut Short scenario faced by so many other cancelled serials. The final episode aired on January 24, 2013, and did, indeed, resolve most of the show's outstanding plotlines.

See also The Silent Service, a similar story featuring the JMSDF rather than the US Navy.