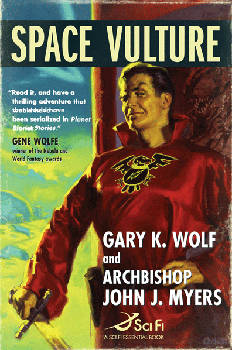 Space Vulture is a science-fiction novel by Gary K. Wolf (of Who Censored Roger Rabbit? fame) and his childhood friend, the Archbishop John J. Myers. It is an homage to the cheesy, pulp sci-fi epics they both enjoyed as young boys, specifically Space Hawk by Anthony Gilmorenote Pseudonym of Harry Bates, who wrote "Farewell to the Master", the basis for The Day the Earth Stood Still (1951) (as you can easily tell from the title).

In the far future, the entire galaxy trembles at the mere mention of Space Vulture, a Space Pirate and the most merciless thief, murderer, slaver, and all-around ne'er-do-well ever known by the sentient masses. His latest crime consists of kidnapping the entire population of a small Earth colony situated on the planet Verlinap, with the intention of selling them to the seedy slavers and human-traders of the planet Medusker. Only Captain Victor Corsaire, the galaxy's greatest lawman and "clean-living hero of millions," can stop him. Armed with quite a variety of combat and survival skills in spite of a painful past and many personal insecurities, Corsaire sets out to rescue the good people of Verlinap and bring the cruel and irredeemable Space Vulture to justice, with his feisty love interest Cali Russell by his side.

A secondary plot involves the only three people to escape Space Vulture's assault on Verlinap (middle-aged, half-human ruffian Gil Terry and Cali's sons, child genius Eliot and crybaby Regin) and their various attempts at finding safety and salvation in the cold reaches of space.