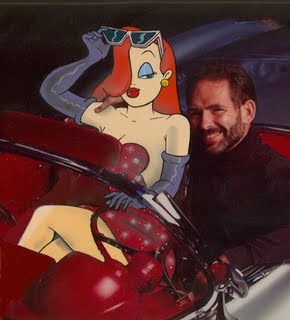 Gary K. Wolf (born January 24, 1941) is an American author and humorist most famous for having written Who Censored Roger Rabbit?, the 1981 urban fantasy / mystery novel that was adapted into the highly successful feature film Who Framed Roger Rabbit in 1988. His novel is cited on this website as the Ur-Example for the Deconstruction Crossover as well as the Trope Codifier for the Roger Rabbit Effect (though that goes back at least as far as Gertie the Dinosaur and Winsor McCay in the early days of animated cinema).

Largely responsible, along with Eric Garcia and a handful of others, for the launch of the Fantastic Noir genre.

You can read his Wikipedia profile here