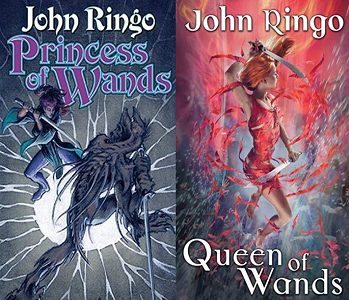 “I’m tired of being looked at like a freak because I believe. Well, get this straight, you stupid suit bastards. Get with belief, now, fast, or this country, this nation, this continent and this world are doomed. Get that through your fat politician heads, for Freya’s sake. I don’t care if you believe in the White God or Odin or fricking Vishnu! Just get some faith, fast, or find somebody to do your job who has it!”
—Janea, Asatru priestess
Advertisement:

Urban Fantasy focusing on a Christian housewife and mother, Barbara Everette, forced into dealing with supernatural villains, written by John Ringo. The Special Circumstances refers to an "under the radar" organization within the FBI specifically tasked with investigating supernatural crimes that more conventional, "mundane" methods are ill-prepared to handle.

In Princess of Wands, Barbara is an ordinary housewife who finds herself taking off on a vacation in Louisiana to get away from the every day grind. Following a whim, instead of continuing on to Baton Rouge (her intended destination) she takes the road less traveled, and because of it finds herself stuck in a back-woods bayou town where sinister plans are afoot, and an Eldritch Abomination threatens to be loosed from its long slumber.

Queen of Wands follows about a year after Princess, whose events have resulted in her joining the Special Circumstances unit, a group of people trained to handle supernatural hostiles. An attack on Janea when investigating unusual happenings in Tennessee leaves her in a special kind of coma, and it's up to Barbara and her friends to discover what happened, as well as rescue Janea's soul.

Ringo's primary motivation in this series is the defense of mainstream Christianity; Barbara is a pious-as-all-get-out churchgoer, a devoted Stay in the Kitchen housewife... and more than experienced in multiple methods of asskicking from all over the world at the urging of her father, a veteran US Air Force pilot who later became a Foreign Service Officer

. She regularly visits the soapbox to state that the negatives that many have come to associate with religion are the domain of fanatics; fire-breathing preachers are jerks, nosy judgmental tattlers are jerks, etc. She doesn't fuss over her children and husband because she's an empty-headed slave, she does it because she loves them, warts and all (even her somewhat slovenly husband who'd rather host football with his buddies than indulge in his healthy lingerie-clad wife).

As of August 2012 there are two books to the series: Princess of Wands and Queen of Wands.

This work provide examples of: