Literature / Legacy of the Aldenata 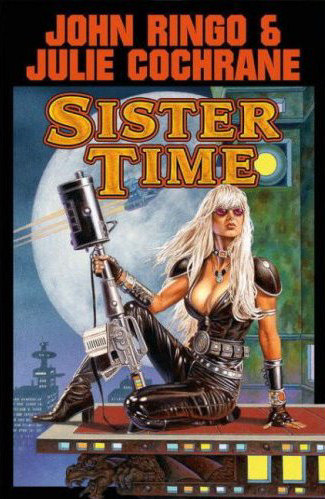 The Legacy of the Aldenata, sometimes known as the Posleen War Series, is a science fiction universe created by Military Science Fiction author John Ringo. The series started in the year 2000 with the publication of A Hymn Before Battle, set 20 Minutes into the Future. As you can imagine, it is now Alternate History. The story starts with the Galactic Federation, a coalition of seemingly, note the operative word here, benevolent races make first contact (not really though for numerous reasons) with Earth. That's the good news.

The bad news is that they are being invaded by the Posleen, or People of the Ships in their language, and for various reasons the Galactics can't fight worth a damn. This combined with humanity's long history of military confrontation means that Humans Are Special and get offered a job as Hired Guns for the Galactics, defending them from the Posleen in exchange for advanced tech. Oh, and a chance to defend Earth from the Posleen which are headed our way. And the rulers of the Galactic Federation, the Darhel, are a bunch of Corrupt Corporate Executives that want to turn all of humanity into slave soldiers to keep them in power. After the Posleen are defeated, however, The Federation is invaded by enemies worse than the Posleen, and all the mismanagement and cynical manipulation done by those Corrupt Corporate Executives starts to bite them in the ass.

Between the top-notch military action, dark humor, political intrigue and back-stabbing, this series is one of the best works of Military Science Fiction out there.

Alternative Title(s): Posleen War Series, The Legacy Of The Aldenata