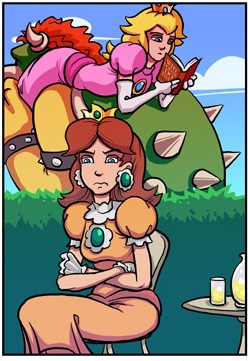 Oh, why must it always be her?

Sure, the protagonists of any show where out of the ordinary stuff happens are going to be Weirdness Magnets, but there is something about the number of times this one character is targeted specifically that stands out. Danger seeks them out like a bloodhound. While the other heroes are off foiling the Evil Plan, she (and 90% of the time, it will be a "she") is busy trying to survive. The Designated Victim isn't incompetent or helpless or accident prone or that much different from the rest of the cast. Something in her DNA is just a magnet for danger, probably something of the same material that went into the construction of Tokyo and New York.

Often times the victim is female. Usually within the realms of The Chick, Faux Action Girl, a girl who has gone through Chickification, an adaptation of a girl who has an intense Girliness Upgrade, and sometimes even a true Action Girl when the writer just has no one else he thinks would be an appropriate victim. Male examples do exist and they are either younger siblings (usually the youngest of the litter) or even true males who are usually The Hero and are exceedingly capable can fall victim for a specific reason. In this case it is usually for someone who is usually the victim such as a younger sibling or a female to save them in their own Day In The Lime Light game or episode.