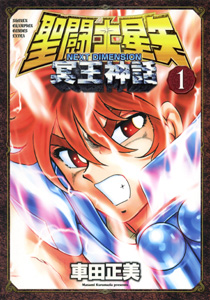 The official sequel to the Saint Seiya classic series. Currently it is being written, drawn in full color and released by Masami Kurumada.

Please note that if you have not finished the original manga, then massive spoilers follow.

During the final battle between Athena's saints and the true body of Hades in Elysium (or Elysion, if you prefer), Hades looked into the eyes of the Pegasus saint Seiya, and remembered how ages ago, in the previous holy war, he was close friends with the previous Pegasus saint. We then cut back to the beginning of this holy war, in which two gold saints are sent by the pope to kill the boy destined to serve as Hades' vessel before the god of the underworld can take over his body. However, they are stopped by a young man named Tenma, who is a gifted cosmo user.

Later on, we cut to the present day, which in-universe means of 1990. After the final fight with Hades Seiya took a direct attack from Hades's cursed sword in order to defend Athena and give her the chance to destroy the dark god once and for all. As a result, Seiya fell into a catatonic state. Shun, hoping for answers, approaches Saori, who's taken it upon herself to watch over Seiya. She reveals that Hades' sword is still inside of Seiya, and that in three days, it will reach his heart and kill him. In order to save Seiya, Athena and Shun travel to the time of the previous holy war in order to destroy Hades' sword then, so that it may never be used on Seiya in the future.