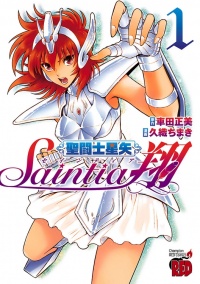 An interquel to the original Saint Seiya, Saintia Sho is set in the same time as the original story. While the original Bronze Saints were preparing to fight each other during the Sanctuary arc, Shoko, a young girl, meets Saori Kido who is the reincarnation of Athena. She discovers quickly that her sister Kyoko she believed to be trained in a private school has, in fact, become a Saintia, a female bodyguard to the goddess. But another evil goddess appears: Eris, goddess of strife and discord.

Eris wants to use Shoko as a future host, and to destroy the world but fails, using Kyoko instead. Shoko will have now to free her sister and protect Athena from whatever threat will appear.

There are five core cast members, including:

An anime produced in cooperation between Toei Animation and GONZO has been confirmed, and went on broadcast for 12 episodes in December 2018 on Prime Video via anime's official website

. Crunchyroll is streaming it in many western countries.