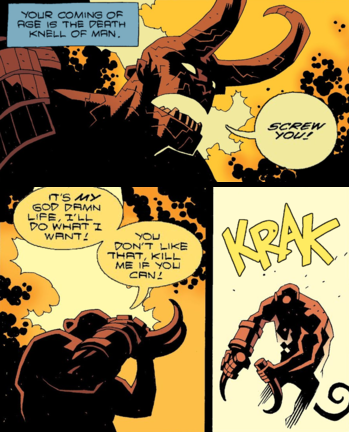 The Harbinger of the Apocalypse would rather eat pancakes instead.
"And I do not know what thy Father will say..."
— Beelzebub, Good Omens
Advertisement:

He's The Antichrist, the spawn of Satan, a demon destined to bring about the doom of all men and the end of all things, but he just does not feel like it. Maybe the relationship between him and Dad is strained. Maybe he was raised by humans and shown the ways of love and justice. Perhaps there are just more interesting things to do. The sheer irony of the ultimate rebel's offspring rebelling against him is delicious. Likely they are only partly demonic and there is some humanity in them, influencing their very nature. Maybe, they'd simply reply the way Hellboy would when someone tells him You Can't Fight Fate: "Says who?" Or perhaps they merely read The Bible and decided that being on the side that's doomed to lose horribly is just a bad idea.

Whatever the reason, this Antichrist doesn't feel like it and says, "Screw Destiny! I'm not causing The End of the World as We Know It!" He might even sacrifice himself just to thwart the End of Days, thus dying for our sins.

The Forces of Evil™ often make it really difficult for themselves; by demanding that their champion kill their lover, their friends, and anyone who is nice to them. The Anti-Antichrist didn't want to join their club in the first place; how is this supposed to convince them? What did they think the response was going to be? They don't consider it at all. It's part of the rules, dagnabit. If they promised and delivered Better Living Through Evil, they might have had more success.

Beware the Nice Ones and the Villain with Good Publicity. Even though they've turned against their destiny, they still have a Villainous Lineage. It's especially bad if the morons around them know about their "destiny" and decide to Bully A Dragon.

While an Anti-Antichrist may side against Team Evil, they are not required to be good or nice. Even if they are nice, members of Team Good (often a Knight Templar) may see their turn as inevitable and seek to end them before they can turn. They may also be accused of playing on Team Good's sympathies and are often the first people to be looked at when something goes wrong... which may in and of itself cause them to turn evil.

Often overlaps with Apocalypse Maiden, which many Anti-Antichrists are by nature. Compare I Am Not a Gun, where a war machine refuses to follow its programming to destroy everything. See also The Unchosen One. Often includes a Faustian Rebellion, where one uses the satanic powers he was given to fight those very beings.

Not to be confused with Satan Is Good, which is distinguished by having the apparent bringer of evil be a covert force for good, whereas Anti-Antichrists generally represent actual forces of evil. See also Prophecy Twist for when it turns out that the one thought to be destined to destroy the world is actually destined to save it.