Series / Todd and the Book of Pure Evil 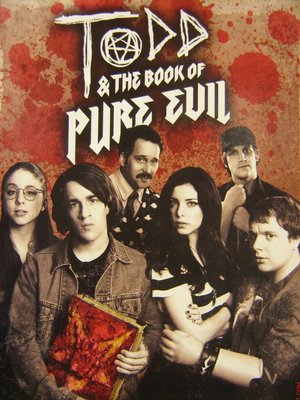 Todd and the Book of Pure Evil is a Canadian horror/comedy series created by Craig David Wallace, Charles Picco and Anthony Leo. The series is based on a short film of the same name, and is perhaps best described as Kevin Smith meets the Evil Dead. Appropriately, one of the series' regulars is Jason Mewes. It premiered in September 2010 on Space Channel.

Todd is a metalhead and underachiever attending Crowley High who discovers an Artifact of Doom known as the Book of Pure Evil. Soon, he is pulled into a struggle against the forces of evil, which include the creatures spawned by the book, the local guidance counselor and a secret cabal of Satanists. Todd is joined by his friends: a fellow stoner and amputee named Curtis; a science geek named Hannah who has a massive crush on Todd; and Jenny, the object of Todd's desire.

The series is not one for the squeamish, as it combines copious amounts of Gorn, Toilet Humor and Black Comedy. It's also a loving tribute to heavy metal music, and numerous references to various metal bands can be found throughout the series.

The second season was the last, judging by the season finale's climax in which Todd wishes for the Book to go somewhere it will never be found. The series concluded with a crowdfunded movie released in December 2017, Todd and the Book of Pure Evil: The End of the End.