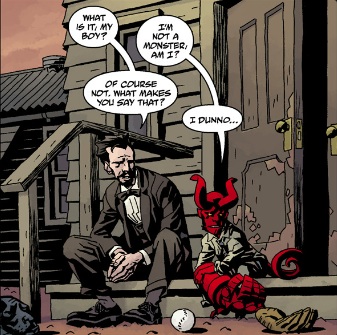 Good Parenting: is there any Angst it can't cure?
"I had a really wonderful upbringing. We were a tight family. It was wonderful to grow up with so many siblings. We were all just a year or two apart, and we were always so supportive of each other. I learned everything from my older brother and sister and taught it to my younger sisters."
— Joaquin Phoenix
Advertisement:

"Heroes are made, not born" is a common and unstated theme in a lot of works. Though a good many heroic origins proudly trot out heroes who have been raised in The Spartan Way and can look Death in the eye-sockets without blinking before leaving their Tibetan monastery home, quite a few grew up Farm Boys who never picked up anything sharper than a hoe, though those can be quite a handful.

In fact, heroes with a down-to-earth upbringing tend to have a unique advantage over the more badass and epic ones: they're more centered. While they won't be saints, they'll have a strong enough moral compass to navigate most moral dilemmas, resist The Dark Side, and even refute Hannibal Lectures that more emotionally fragile heroes struggle with. If they gain super powers they won't forget "the little people" and turn into a Smug Super with delusions of grandeur. Though they didn't gain the crime-fighting prowess of a lifetime of Charles Atlas training, or the street-savvy of an orphan with a Dark and Troubled Past, they also didn't sacrifice basic skills or their social life.

These differences are often contrasted by pairing these characters together as an Action Hero and an Action Survivor in an Action Duo or pitting them against each other as Technician Versus Performer. The contrast can even be made an integral plot point by pitting the homey hero against a Tyke Bomb Raised by Orcs, and exploring just how much upbringing can damn or redeem. Frequently, this is played with by revealing the hero has Secret Legacy for evil. In these cases, it's usually left implicit (or explicitly stated) that without their upbringing they'd have gone evil. The Anti Anti Christ in particular usually has this for a background.

Evenhanded authors will acknowledge that the "classical" hero is more able at their job because of their sacrifices, while the more "normal" one is a hero because that which was not sacrificed is what makes them heroic. More biased tellings can make one or the other out as the better hero, usually slanting towards the meek, though Never Be a Hero does crop up.

One reason why Turn Out Like His Father can often keep the child from being Evil.

Also see Misery Builds Character, Nature Versus Nurture (and especially Nurture over Nature), Muggle Foster Parents. Not to be confused with A Hero Is Born or A Minor Kidroduction.