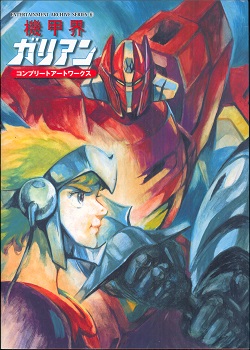 Now, hold that sword-like crescent moon in your hands. And run like the wind.

In one night, the three-thousand-year history of House Volder was destroyed. No, as long as the prince lives, it is not over. One day, our greatest dream will come true. After that abominable day, a journey of hardships began... all to escape the gaze of Marder's hunters. It was obvious that Marder, subjugator of Arst, would issue orders to capture the prince. It became necessary to raise the prince as my own grandson. But this did not mean we were fleeing with neither purpose nor destination. We believed that, somewhere in this world, an iron colossus existed, and it was this unknown land that we sought. The legends of old state that "when evil rules the world, Galient the Iron Giant will manifest, and cleanse this world of darkness."
Advertisement:

Panzer World Galient (機甲界ガリアン Kikōkai Garian)(1984-1985) is a Humongous Mecha anime produced by Sunrise, directed by Ryosuke Takahashi of Armored Trooper VOTOMS fame and featured the mechanical designs of Yutaka Izubuchi (who also designed mechas in some Gundam series and Patlabor, as well as created and directed Rahxephon).

Set in the far flung medieval-looking world of Arst, the millenia-old kingdom of Volder is celebrating the birth of Prince Jordy Volder when the troops of the conqueror Marder invade the capital city, using an army of advanced robots called panzers. The city falls easily, and during the battle the king is killed and the queen kidnapped, but not before they trust their newborn son to Asbeth, one of their most loyal and most badass soldiers. Asbeth flees the city and becomes a wandering warrior in order to hide Jordy from Marder, raising him as his own grandson while searching the land for the legendary giant robot "panzer" Galient, which is one of many panzers to have been preserved underground for thousands of years. Twelve years later, Jordy finds Galient and prepares to fight Marder, who is conquering all of Arst in preparation of his plan for dominance of the Crescent Galaxy.

Galient is noteworthy for being one of the first anime to combine a Medieval European Fantasy setting with Humongous Mecha.

Compare and contrast with Aura Battler Dunbine and Vision of Escaflowne.

Tropes from the show:

What is the point of eternal peace? Life and death clash against each other. Lusts and ideals intertwine, and joys and sorrows color this world. Therefore, paradise... can only be unbearable grief. It can only be unbound joy. The paradise of all living things is, indeed, in chaos.