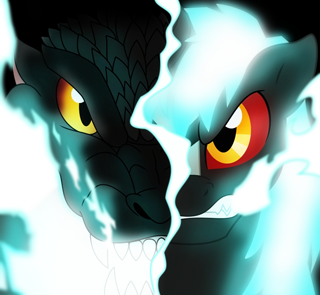 Matter cannot be created nor destroyed, only moved, displaced, changed into energy; or morphed into a new state....All four just happened...
Advertisement:

In the heart of the Pacific Ocean, an all out invasion-turned gang-war occurred without warning between the two largest factions of the planet's kaiju population. As all hell is breaking loose on Solgell Island, the Global Defense Force see an opportunity to test a new superweapon, trying to rid the world of some of mankind's biggest threats while they are all clustered together. As the faction leaders unleashed their most devastating attacks, Dimension Tide fired and the combined energy seemed to erase some of the factions' power players off the map.

But, as the world cheered or bowed their heads in loss, none of them took a moment to realize Dimension Tide's blast, long believed to be an artificial black hole; behaved nothing like what theoretical physicists believed it should.

Six of the most powerful beings on the planet weren't crushed, imprisoned, or vaporized; they were moved.

Moved, changed, shrunk; but still very much alive. Equestria just got six new denizens just as a horror from the kaiju home realm sets its sights on Harmony's world.

The Bridge is a crossover fanfic written by Tarbtano

(with some additional illustrations by Pyrus-Leonidas

), contributed by Skylark8756, and proofread by Faith-Wolff and Lance Omikron, combining My Little Pony: Friendship Is Magic, Godzilla, Gamera, Pacific Rim, Ultra Series, and a few other Kaiju franchises. Timeline-wise, it begins some time after the events of "Inspiration Manifestation". Other future sidestories show also incorporate elements of the Jurassic Park, Carnosaur, and many Syfy Channel Original Movies (Dinocroc in particular) series in unrelated pieces taking place on Terra and Sailor Moon inspired events and expies in Equestria's Japan equivalent. The fanfic is currently in progress (latest chapter posted as of 12/23/2021), marked as incomplete currently with sixty nine chapters (50 normal chapters note some chapters are broken into multiple parts since they lead directly into each other, 18 bonus chapters, and two One-shots) and one Q&A section published.

that he uses to release trailers, promos, and such.

The Bridge also contains many different sidestories, spinoffs, and bits of supplementary info. A reading list that suggests what order to view them in relation to the main fic can be found here.

Be aware that even the core story alone is huge. As of 2020, it is the single largest piece of Godzilla franchise literature known.

In addition to its canon side material, The Bridge has also generated a wealth of Recursive Fanfiction. A list of links to and summaries of both the canon sidestories and recursive fics can be found here.

This fic's universe is one of the many alternate universes visited by the protagonists of Equestria: Across the Multiverse, with the twist that it is the ponies traveling to Godzilla's world and transforming into Kaiju. In later chapters, the alternate versions of the Kaiju become allies of the Jaunters and occasionally travel with them to other universes to help them.